As I begin this first post of our vacation to Spain I am headed out over the English Coast towards France then south in to Spain. It was a long, sleepless flight to London. Sat next to a man who was a slightly younger version of Mick Jagger. He drank like a fish and rarely stopped moving. Every time I just started to doze off he seemed to turn the fidgeting knob up higher. It was like trying to sleep in a bouncy house full of 10 jumping kids. I eventually gave up and watched a movie.

I landed at about 7:30 pm local time Sunday. Getting into Spain was a non-event. I was first in the queue at the customs window and the border agent didn't ask me a single question. She looked at the passport photo, looked at me, stamped the passport and I was on my merry way to baggage claim in less than 30 seconds. LOVE it! Wonder if it's this easy to get out.

I think my airport taxi driver's day job is race car driver. The ride was a blur and I was a little green when we crossed the finish line at the hotel. I poured myself out of the cab, kissed my husband, did a quick freshen up, then bleary -eyed went out to meet Dean's co-workers. Keep in mind my body thinks it's 4:30 in the morning and I've been up for nearly 24 hours, no thanks to Mick Jaggar. The Quiet Man, is an Irish Bar with live music and Irish beer on tap. My first night in Spain and I'm in an Irish bar. Hmm. Dean and his colleagues hadn't eaten yet and they were all hungry. So 10 of us pile into a couple taxis and off we went to the W Hotel Barcelona, where someone said the food was excellent. No lie, it was excellent. Eating dinner, or supper as it's called here, begins at 9:00 pm. It was easily 10:15 pm when the meals arrived at the table. Dean and I got back to the hotel around midnight and the restaurants and tapas bars were still full of people. It felt soooo good to lay down in a chilled room, in a bed with great pillows, sans the fidgeting Mick Jagger doppelgänger.

Oct 15
Oddly enough I only slept about 4 hours and was wide awake very early yet somehow my morning went in slow motion. The hotel serves a really great breakfast. Baked beans are on the breakfast menu here too, just like we had in Ireland last fall. Still a bit trippy yet it works. I made my way to the hop-on/hop-off bus; most major tourist cities have them. This one handed out headphones and the busses have an open-air second level. Simply plug in at your seat and you make your way through the busy city streets while getting the skinny on all the sites, in 10 language options. My main mission today was to see Park Guell. Barcelona is a big, busy city and full of tourists from all over. It was rare that I heard any English today.
Guell Park was originally commissioned to be a private estate for Eusebio Guell and designed by Barcelona's most famous Modernisme architect, Antoni Gaudi. Gaudi's work is all over the city. The house project fell through and the grounds became a public space. Guadi used the contours of the hillside to create arcades and viaducts all of natural stone. The most striking features are those with "trencades" or mosaics made from broken tiles. 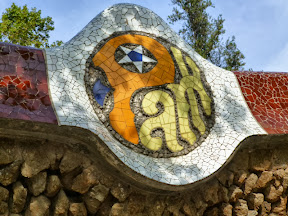 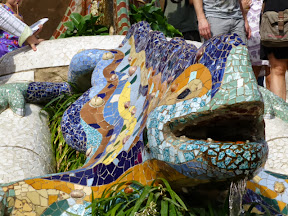 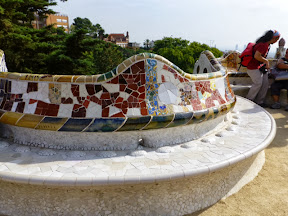 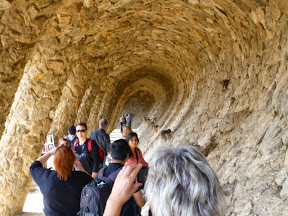 Entertaining observations:
British Airways in-air security ... It's important to know my seat from Seattle to Heathrow was a bulkhead, aisle seat just outside the cockpit. The airline fed me a couple times during my flight and I had saved a square of chocolate to put in my bag for later. While landing, the square of chocolate was sitting on top of a book on my lap and I pretty much forgot it was there. When the pilot applied the brakes after landing, that chocolate square slid off the book onto the floor and glided toward the front of the plane, then it slid right under the cockpit door. They should probably fix that, eh?

Bathroom visit at Park Guell, Barcelona ...
So the park was really crowded and I decided I better use the ladies before heading back to the bus. The queue was expectedly long. As I inched closer to the toilets, there was a woman rationing out toilet paper to the each person on the way into the bathrooms, and providing one paper towel (to those who bothered to wash their hands) on the way out. OK, that's actually not the part that really got me. I watched most people hand her 10-50 cents on their way out. The guidebooks say you don't have to tip waiters and cab drivers in Spain but it appears we are supposed to tip the park employee who is rationing out toilet paper to guests using the public toilets? Huh?

What I learned today:
Anyone who drives in Seattle will appreciate this. There are over a 100,000 meters of bike lanes in Barcelona. The lanes are frequently do not co-exist with the car lanes. I noticed many roads with a pedestrian walkway between the car lanes and the bike lanes. The bicyclists also pay an annual fee to the city for the use of the lanes. I don't know how they regulate it. I noticed bicyclists all over the place and never once noticed them competing with cars, busses or vespas for space on the road.

Words/Phrases of the Day
"Phubbing" - snubbing someone with your phone instead of engaging them. Read that in the British Airways in-flight magazine.

"Su frio" - how the locals say "So Cold!" It is 75°F here during the day and most buildings have their heat on.


Views of Barcelona from Park Guell 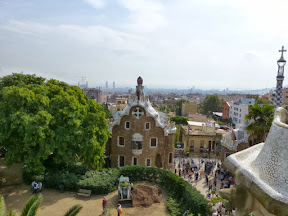 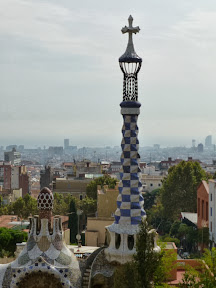