Fair warning ... this blog has a lot to do with food

I've been here 2 full days and already it's a blur. I need to back up and tell you about Tuesday night's supper. It's 9:30 pm when Dean and I get in a taxi to go meet another group of Dean's colleagues. They wanted to meet "Dean's wife". We were a table of 15 in a large family style, private dining room in a restaurant. I was the only non WMware person in attendance and the team did a great job of keeping the topic off work. It was an international crowd with Germany, Denmark, Norway, Sweden, the Netherlands, England, and the U.S all represented. The food was served family style and the choices were meat, or meat or um ... meat. The appetizers included sausage, blood pudding, roasted red peppers, fava beans cooked in pork fat (these were deeeelicious!) and some type of crumbled, deep fried meat. I couldn't tell you what is was but it was good and flavored in seasoning I didn't recognize. Then the main course arrived, roasted pork with the cracklin' pig skin still on, medium rare steak with roasted tomato halves, lamb shanks, tossed iceberg lettuce, and french fries. Then they brought dessert ... some sort of flakey baked goodness with a creamy filling. We were still eating at midnight. Then we came back to the hotel and both worked for a hour before finally turning out the light at 2 am.

Morning came way to fast. I'm supposed to be on vacation. Dean headed out to the conference around 8 am so I forced myself outta bed, otherwise I'm sure I would have slept until noon. I headed out for the Barri Gotic (Gothic Quarter neighborhood to start my tourist day at the Picasso Museum. The Barri Gotic is the oldest part of the city and the locations where the Romans found a new colony. Well, I way overshot my target and got lost. It was so beautiful out I decided to keep wondering around since I was already somewhat lost. I had a general sense of where I needed to go to get back to the hotel so why not see what there is to see? Below are photos of Parque Ciutadella and the Arc De Triomf in Barcelona. 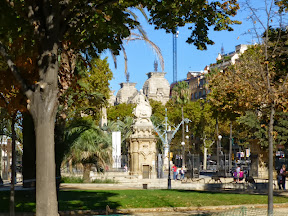 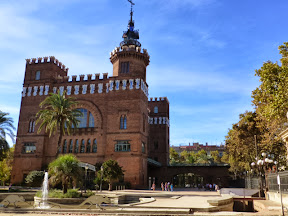 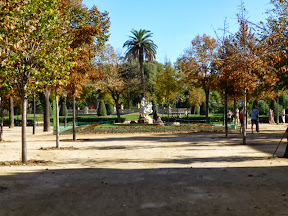 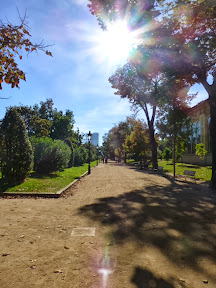 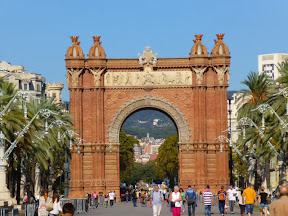 So I finally found the Picasso museum and my timing was perfect. I only had a 10 minute wait to buy a ticket and 2 huge tour groups got in line behind me. His art work is laid out chronologically and the portraits he completed in his early teens are quite remarkable. The gift he had, even as a small boy, is evident. There was a series of small paintings he did in his late teens/early twenties where the viewer is looking into the scene from outside a window. The edges are muted and fuzzy yet you know exactly what the furniture and fixtures are in the room. The people have no faces yet the emotion is palpable just by the body expression and position, and lighting effects used in the paints. In some small way it felt like I was spying on very intimate moments in the lives of others.

I left the museum with my exploratory mood still intact and headed off in the general direction of the Barcelona Cathedral. Here are a couple snapshots of the Barri Gotic ... very narrow streets and the buildings are quite close together. Some only a single car width across. The structures are also just tall enough that looking up provides no frame of reference, unless you are in a large plaza. 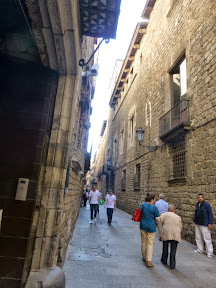 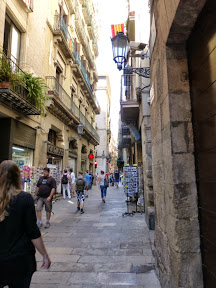 I came across one of the large city markets ... full of everything fresh you can imagine. This market was full of locals an very few tourists. They have this fresh squeezed fruit juice in every possible fruit flavor, and it's already in a cup with a straw. They display the cups sitting in ice on their stands. Delicious and refreshing. 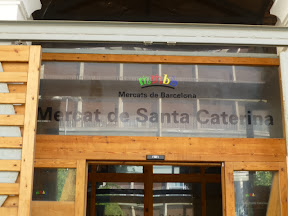 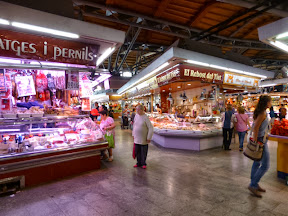 I keep going, and happen look up as I'm crossing a major street and out of nowhere the Cathedral appears. 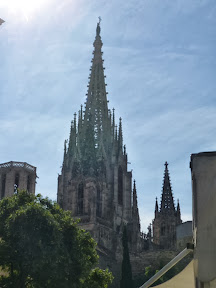 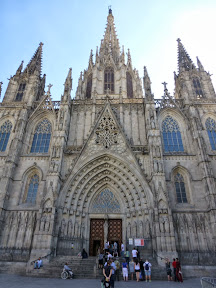 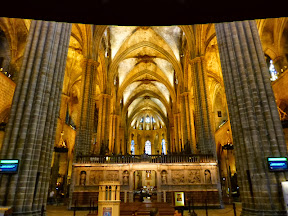 a view from the top of the cathedral 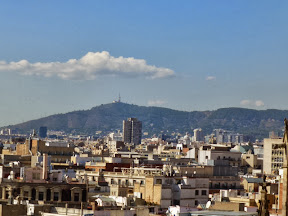 I slowly made my way back to the hotel, window shopping along the way. Dean attended a client event tonight so I headed up to the hotel rooftop terrace for tapas. Now I'm going to tell you about the ham. Below is the view from my dining table and a shot of my supper. It included jamon iberico de bellota (acorn) and bread pie (very thinly sliced bread with fresh tomato (almost pureed consistency) and very light cheese on top), 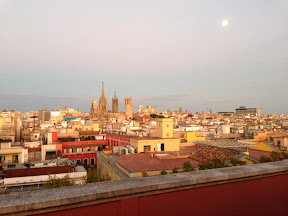 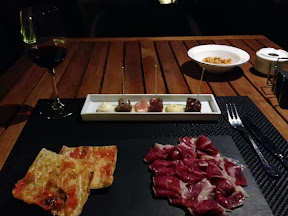 What learned today
It's all about the Iberian Ham. I stopped in a butcher shop today to learn about it. Jamón ibérico is a type of cured ham produced mostly in Spain. The jamón ibérico is made from black Iberian pigs, or cross-bred pigs as long as they are at least 75% ibérico.

You'll have to trust me ... you've not tasted ham like this unless you've been here or special ordered it. Oh my, my, my it was a-mazing.

Work/Phrase of the Day
None today ... I didn't hear much English. Oddly enough it was kind of nice.

Entertaining Observations
Cell Phones - This is a large city with throngs of people everywhere. I noticed very few people walk around with their nose glued to their cell phones. People just walk or walk and talk to their friends. Those who were walking about with nose to cell phone seemed to all speak English, with an American accent. When people were siting down at an outdoor cafe everyone had their cell phones out.

Photos - There were loads of tourists in the same places I was today. Several times when I noticed couples attempting to take self shots, I offered to take it for them. Not once did any of those folks offer to return the favor. I guess if your a tourist/traveller doing your own thing there is no courtesy photo reciprocity.

Location:Barri Gotic
Posted by Terrie F. at 6:56 AM