We were up a bit earlier today and went back to France. It was quite windy here today with some gusts making it hard to walk. Rain threatened the better part of the day yet; thankfully, never came. The weather has been good to us the entire trip and it looks to continue through at least Saturday. Despite the humidity in San Sebastián, it hasn't rained at all during the day and as far as we can tell it only rained one night.

How many trains to and from France on this day, you ask?
Only 4 trains. The minimum required, though it was longer than a 45 minute trip one-way. The wait for the train going from Hendeya to St-Jean-de-Luz was an hour. The Spanish trains leave right on time ... you're either on or off, and then it's gone. There is no time to ponder your situation or surroundings.

We finally had some good shopping and I got some much needed retail therapy. I must admit I am both amazed and dissapointed, there are no local artisan shops or areas in either city we've visited. San Sebastián is full of fashion and the few items which appear local are surely mass produced in China. Sound familiar? Even Barcelona was full of the same kinds of stuff everywhere I went, mostly clothes, shoes, leather goods and tourist trinkets. The one exception we found is they do make gorgeous table and bath linens in the local Basque region.

A sales lady in St-Jean-de-Luz said we wouldn't really find hand made items/local artisans around Basque Country, except maybe old town San Sebastián (which is right where we're staying and there are none). She highly recommended Portugal and said the local food and artisans are incredible in the towns on the outskirts of Lisbon. We also had an animated conversation with her about Orlando, Fl. She was so excited to have taken her daughter and cannot wait to go back. Her face lit up and she exclaimed "it was like magic!" She also talked about how she can relate to the patriotism and passion Americans have for their country because the Basque feel the same way and will fight to keep their traditions, language and culture alive. 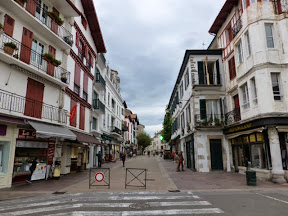 Macaroons - oh my! This cookie just grabs you and it's impossible to focus on anything else when eating one...yes it's that good. The French Basque are apparently famous for their macaroons and now we completely understand. We kept saying "yummm", and "um-hmmmmm" the whole time we ate one cookie. Wish I had bought some to take home yet something tells me there was no chance they'd actually make it out of the country let alone all the way home.

The macaroons are the smaller wafers on top and left. 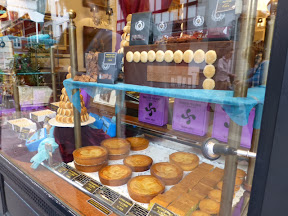 Trees inside Place Louis XIV (main square in town). These are Plane Trees, which are cut back in winter so in summer they'll come back with thick, shady foliage. 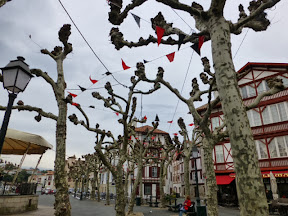 Back in San Sebastián we dropped off our few purchases at the hotel and headed to dinner at our favorite spot, La Viña. We arrived at the start of the dinner rush so there was no waiting for space at the bar. We had a few pintxos (Peen-chohs) which are very small plates of food, allowing you to taste several items to make a meal. Of course we finished our meal with their scrumptious cheesecake.

This happy, friendly man has waited on us every night we've been here. He hustles, moving non-stop for hours so we haven't had a chance to learn his name. Maybe tomorrow on our last night in town. La Viña is a busy, busy place during the lunch and dinner rush. 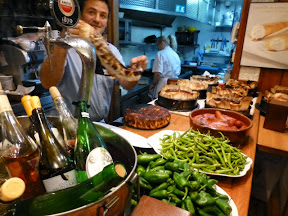 La Viña's award winning pinxto (fresh cream cheese and anchovy, wrapped in a toasted shell) Sooooo good!! Again, these are not the salty, fishy anchovies we get in the states. 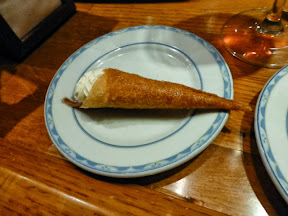 A meatball with tomato/pepper sauce and a few potatoe fries. The other plate are jamón croquettes. Bite size comfort food filled with ham and creamy potatoes, then deep fried. 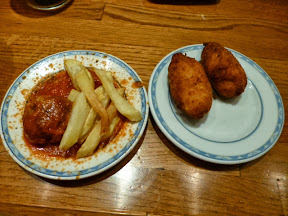 Our walk to the hotel from dinner included a short detour. This view is looking down from a bridge onto the street where our hotel is. 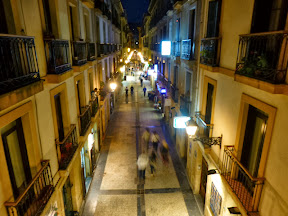 Same street, looking towards end of street which opens onto Concha Bay 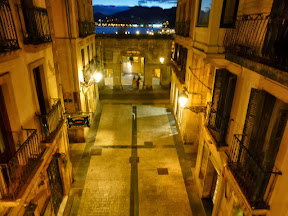 Observations
Trains - The train system here in Spain is truly remarkable. Americans should be so lucky to have mass transit on this scale. Maybe some cities operate like this, certainly not Seattle. I noticed lots of elderly riding the trains, whether to go shopping, visiting, or out for an evening meal. The system is so easy to use with frequently running trains. I especially love how it seems to keep the elderly mobile and perhaps less reliant on assistance until much later in their lives.

To Go Cups - We noticed some of the coffee shops here have to-go cups for coffees or espressos, though we've only seen one person in San Sebastián choose that option. Most folks actually stop and stand at the bar to enjoy their coffee and whatever they're eating off of real dinnerware. I noticed one lady come in for two large cups of coffee. She left with the full cups of coffee and saucers, to be returned later. We often saw people leave with dishes and cups from restaurants and cafés only to return them later. It's worth noting Barcelona is full of Starbuck's coffee stores so we saw to-go cups were more common in that city.