A Tale of Seven Trains

You can probably tell from the lead in where today's story is going, so let's take the journey to St-Jean-de-Luz, France.

We were off to a very late start. The late nights are catching up with us and Dean actually slept until 10 am which puts us on our way around noon maybe a little later. We stopped at our usual AM spot for a very light breakfast and fresh squeezed OJ. We watched a whole orange go into a juicing machine and end up as liquid in a glass. They keep the oranges cold so the OJ is a nice cool temperature when it hits the class. Deelish!

Here's what we think we know when we start our trip to France: We can get to St-Jean-de-Luz in about 45 minutes on 2 trains. One train from San Sebastián to the French border at Hendaye and the second from the French border to our destination.

Train 2
Gets us from Irun to Hendeye, France. There is no border control. We walked out of the Spanish train station and went 300 yards or so into the French train station. The Spanish train system is much, much easier to use than the French system. It's a quick 2 minutes at a kiosk in Spain to get your ticket and the trains run every 10-15 minutes ... in France there is a long line to get a ticket because the automated kiosks don't take cash and or non-european issued credit cards. The tickets are significantly more expensive in France relative to distance travelled and we had a 30-45 minute wait. There is no border control between Spain and France and I admit I was disappointed to not be getting a French stamp in my passport.

Train 3
Gets us from Hendeya to St-Jean-De-Luz only we missed our stop partially because the announcement in French was spoken so quickly we had no idea what was said. We were on a long train and as we rolled out of the station we saw the sign.

Train 4
So, we get off at the next stop to wait 30 minutes for a train to take us 10 minutes back the direction we just came. Finally we arrive at our destination around 4 pm. Keep in mind we got on the first train in San Sebastián at about 1:30 pm.

St-Jean-De-Luz
FINALLY!! It is a charming little beach town and a favorite of the French. We hear it is jam-packed during July & August. It's easy to see the appeal. It has a gorgeous beach, a fun shopping district with loads of fun stores, and you can walk just about everywhere. So it's now after 5 pm, we're starving, our train goes back to the border at 7 pm and the restaurants are all closed until 6:30 pm. The stores started to pack up for the night around 6 pm, so we barely had a chance to stroll through, eat a quick sandwich and head back to the train.

Below is Eglise St. Jean-Baptiste. St-Jean-de-Luz was essentially put on the map when Louis XIV married Marie-Therese in 1660. It led to a reconciliation between Europe's two most powerful counties. King Philip IV of Spain gave his daughter in marriage to the king of France, uniting Europe's two largest palaces and helped end a hundred years of hostility between the two countries. The church is roughly half-way between Madrid and Paris. 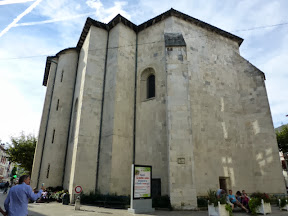 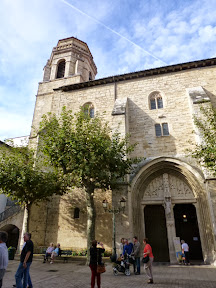 The houses are all white with mostly green or red shudders. There is the occasional house with blue shudders. 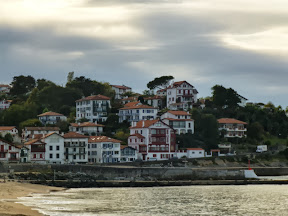 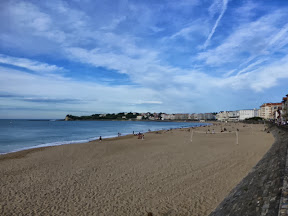 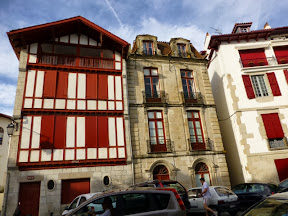 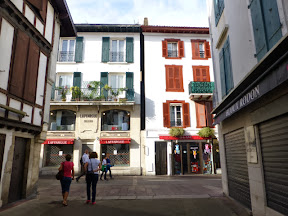 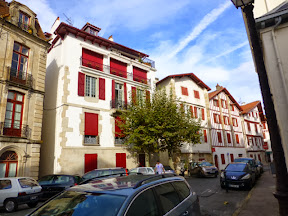 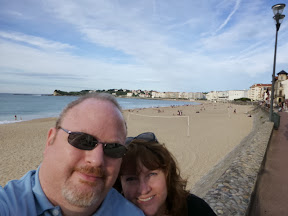 We did manage to find a chocolate shop and other sweet morsels. One of the shopkeepers asked me, in French, if I wanted to have a taste (this was accompanied by a hand gesture offering me a choice from the platter). I obliged and she asked me in a thick French accent if I spoke English ... I respond "Si" ... remember I've been saying "si" for "yes" for over a week now I'm Spain, so the word is now part of my English vocabulary. She looks at me strangely and asked me in Spanish if I speak that language and I respond "no" ... Well you know that look a dog gets when they hear a weird noise and torque their head sideways? That's how the shopkeeper looked at me. I completely confused the woman despite the fact I correctly answered her first question; I just used the wrong language.

Back to the Tale of Seven Trains...

Train 5
This train is on time and begins our trek back to Spain from St-Jean-de-Luz. This leg was a non-event.

Train 6
Rolls in almost immediately at the border in Hendeya to take us back to Spain. The train is busy this time of evening. We're guessing folks are going out and about for dinner. We get off the train in the right city ... one stop too soon. Big sigh. San Sebastián is so much bigger than we thought.

Train 7
This train takes us the one last hop between the two ends of town and brings us back to where our journey began over 8 hours prior. We are weary, hungry travelers in search of a restaurant on our walk to the hotel.

We decided to go back to St-Jean-de-Luz tomorrow so we could take advantage of the shops, see a bit more of the city and challenge ourselves to do it in 4 trains rather than 7. Stay tuned.