We finally got our bodies on local time. I made myself get up with Dean and we actually had breakfast together.

Dean headed to work and I hopped in a taxi headed to Sagrada Familia (Holy Family). It is the unfinished, Modernista style, work of the famous Spanish architect, Antoni Gaudi. It is crammed with symbolism and again he derives much of his inspiration from nature and religion. You just don't think of cathedrals of this magnitude and architectural style being built in modern times. Construction began in 1882. Guadi labored on Sagrada Familia for 43 years and lived like a recluse for the last 14 years of his life devoted exclusively to the cathedral. He was killed by a tram in 1926. Construction began again after the Spanish civl war and continues today. Guadi left detailed instructions with his vision for the cathedral and now visitor ticket fees fund the construction. He knew he would not live to see the work complete and is quoted saying "my client [God] is not in a hurry." It has become one of the most visited sites in the entire world and work is now being performed faster than ever with completion expected between 2020-2030. It will truly be something to behold when it is done.

When I rode past the cathedral on Tuesday, the line to get in was down the block, snaked around the building and went 1/2 down that block. Fortunately, advance tickets can be purchased online. When I arrived, the line was no better than Tuesday, only difference being I was able to walk right in.

If you want to know more, keep reading

What I learned today:
The outside of Sagrada Familia will have18 spires; 4 at each of the 3 entrances representing the 12 Apostles. Four taller towers will be dedicated to the 4 Evangelists. There will be yet a taller tower dedicated to Mary and in the center will stand the grand 560-foot Jesus tower, topped with a cross that will shine like a lighthouse and be visible from sea. Two facades of the church are nearly complete, the Passion Facade and the Nativity Facade. The final facade will be the Glory Facade and will become the main entrance. Each facade chronicles the life of Christ from birth (Nativity) to execution and death (Passion) and finally the Last Judgement as he finds his way to eternal glory with God (Glory).

The inside is Neo-gothic in style and Guadi's inspirations from nature are evident. The columns raise to the ceiling like trees branching out to create a what looks like a forest canopy, with small windows to let light in much like light peaking in through leaves. Gaudi strived for "perfect light" inside the cathedral. When the windows are completed the natural light will not be too dark or too bright, and at night the artificial light will glow in much the same way. Only imagination can give insight as to how spectacular this space will be once the windows are all filled with stained glass.

Guadi paid as much attention to sound as he did to light. High up in the back of the church are the U-shaped choir seats suspended above the nave; enough to seat 1000. The singers will eventually have 4 organs. The space underneath the choir is intentional to keep the music acoustically pure throughout the cathedral. 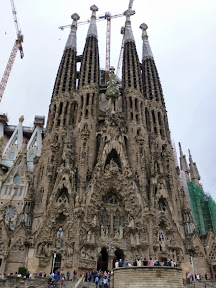 The birth of Jesus. Next photo surrounded by the wise men (left) and angels rejoicing. 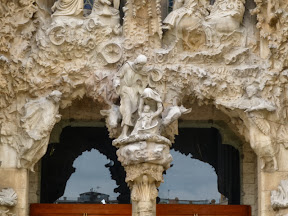 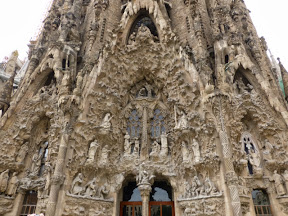 Inside
The ceiling - forest canopy 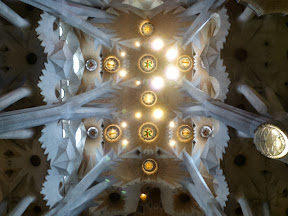 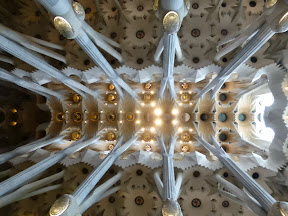 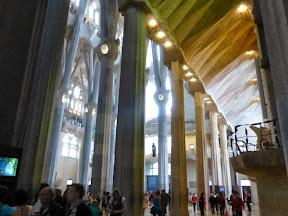 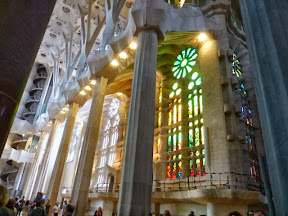 Passion Facade
Christ carrying his cross and Veronica is holding the cloth she used to wipe his face. Above is the execution. The photo below is Peter denying Christ 3 times during the night of his trial. 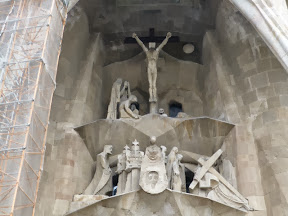 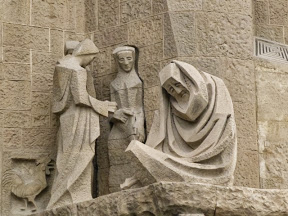 Glory Facade
What will be part of the Glory Facade (under construction, as seen from up inside the Passion Tower and will eventually be the main entrance). 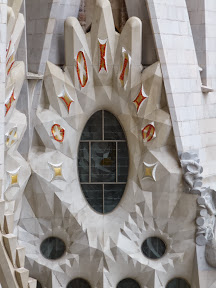 The enormous front doors will be bronze with The Lord's Prayer spelled out in Catalan (local language) surrounded by "Give us our daily bread" in 50 languages. The cathedral will accommodate 8000 worshippers. 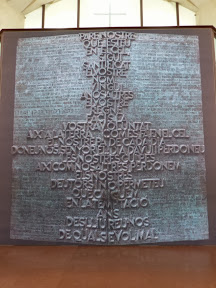 A view of Barcelona from high up inside the Passion Tower. A itsy-bitsy 7-8 person elevator takes you to the top and it's a tight, dizzying spiral of 400+ stairs to get back down. Commanding views of the city and intimate views of the ongoing construction. 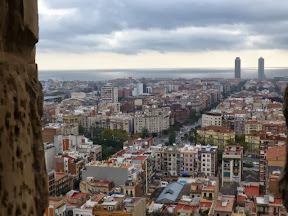 The cathedral took a good chunk of my day. I headed back toward La Rambla (where the hotel was located) and had the taxi driver drop me at the far end, the harbor. This 200 foot monument to Columbus was built for the 1888 world's fair and commemorates his visit to Barcelona following his first trip to America, to which he looks and points. 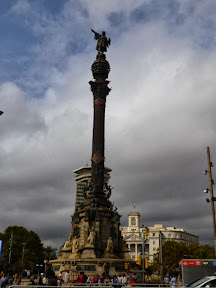 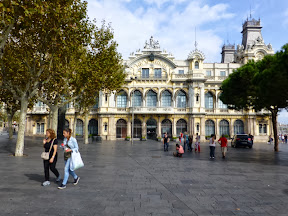 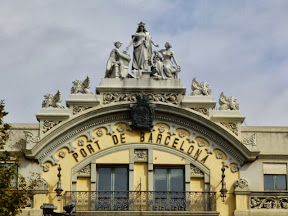 I walked La Rambla back toward the hotel and bought myself a great pair of boots (that I had been eyeing for 3 days). Dean finished his last day at the conference at a decent hour and we enjoyed a great "early" tapas supper on the rooftop terrace of the hotel.

Observations:
Barcelona is a fantastic cosmopolitan city and it's remarkably clean for how big it is. Everyday we saw street sweeper trucks and street cleaners picking up what little litter there was. We are looking forward to visiting the small towns on the Atlantic coast where we hope to connect more with the locals in a way that was difficult in the city.