We were off to an early start today. Up at 6 am-ish to catch the 7:50 train to Bilbao. The town is almost completely dark at 7:15 am on a Sunday. Only one coffee shop was open between our walk from the hotel to the train station. It's actually become our breakfast spot and they also recognize us now.

Unexpected Connection with a Local
The train ride to Bilbao is about 2 hours and 30 minutes. It's a commuter train so it doesn't go too fast and has frequent stops. We sat across the aisle from this little old lady (to qualify old, she was easily well into her 80's). Somewhere along the ride another woman got on and sat in the seat opposite the old lady. This second woman did not look well, was sweating profusely and panting. I initially thought she had just run like mad to catch the train. We handed her a few napkins so she could wipe her face and she muttered something in Spanish that I somehow knew didn't equate to a thank you. It didn't take too long to assess there was something way off about her behavior. Several minutes went by and the second lady got up, wandered down the train and sat down next to someone else, then got up again a few minutes later. The whole time Dean, the old lady and me are peering down the aisle like busy bodies watching her every move. It was at this point the old lady looked at Dean, pointed to the other woman, and made the sign of someone crazy. the second woman wandered by down the aisle past us and spent the rest of her trip in the bathroom smoking. No, smoking on the train is not allowed. Our little old lady friend got up and knocked on the door to tell the woman to stop smoking. We loved that about her, despite the fact it didn't work. We chatted a bit with the old lady during this train ride, Dean used his phone and she used sign language. She totally made us smile.

We expected to see more single family homes as we got out of San Sebastián. This was not the case. What we did see was tons of apartment buildings all very close to the train line. It makes sense since the regional train system is how many Spaniards get around. This part of the Basque Region is lush and green. 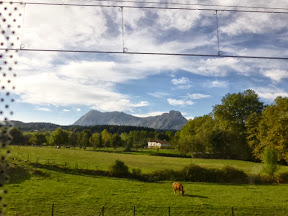 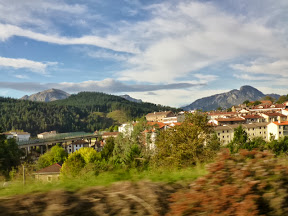 Once in Bilbao, it's easy to see the city making a shift from industrial town to something more modern as well as a tourist destination. The Guggenheim Museum also draws people from all over. There is a handy tram just outside the train station to take you through the city. It follows and almost hugs the curvy Nervion River. The Guggenhiem stands out from every other structure in the city despite the few tall, modern glass buildings.

Front (entrance is down the stairs) 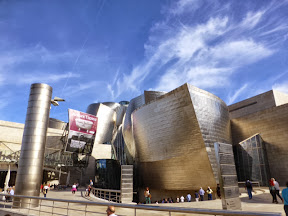 Inside lobby looking up 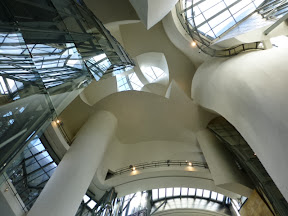 Back of building on the river 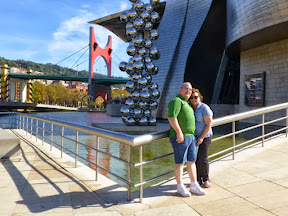 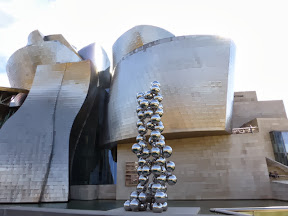 There are 3 floors of exhibits inside the museum. Only two were open this day and we think it is why admission was free. The building was designed by Frank Gehry. There are not many straight lines inside or outside the building. The museum has two permanent collections, the first being The Matter Of Time by Richard Sera. They are immense metal structures, almost like human mazes. Once you are inside interacting with the art itself, space, sound, motion and time are all distorted and in my case, dizzying.

Models of the large metal structures 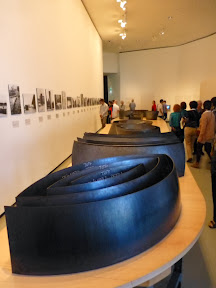 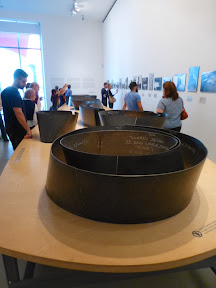 Me needing to hold on after slowing making my out. I had to look up on my way out in order to create a false horizon with the top of the structure and the ceiling. 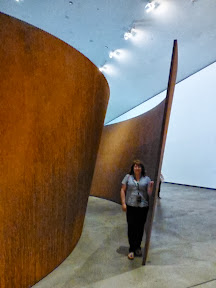 The other permanent collection is by Antoni Tàpies, an artist from the Catalan region. Despite the explanation on the wall, the explanation provided via audio guide, the explanation in our Spain tourist book, and the Guggenheim visitor guide ... the essence of what we were looking at was completely lost on us. It was so completely void of any tangible meaning. Enough said. Google him if you're curious to see what we saw.

The building, we got ... The facade is limestone and titanium and connects the city with its river, and sort of shimmers like a silvery fish in the water. You can see the overlapping of fish scales all throughout the architecture, even the glass enclosed elevator. The outside space if phenomenal. In front is a 42-foot West Highland Terrier made of 60,000 plants and flowers. It was originally intended to be temporary; however, the people of Bilbao fell in love with it and bought it. It is lovingly referred to as "Puppy." 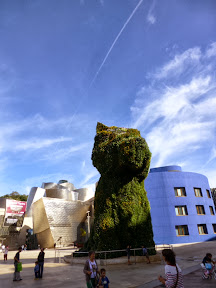 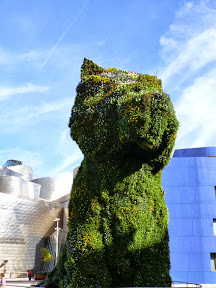 Looking across the river from back of building 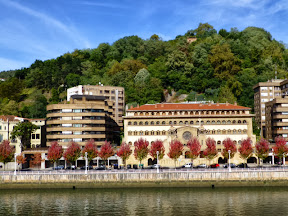 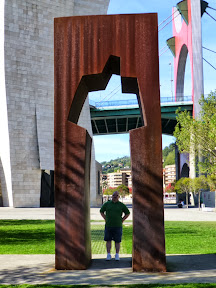 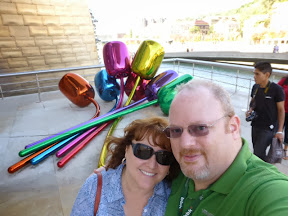 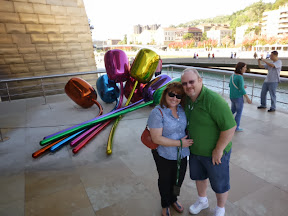 Back to the train, and guess who gets on? Yep, the same sweet old lady. She greeted us when she got on but didn't sit next to us this time. Her destination came before ours and on her way out she stopped to give us a little bag of local hard candies. She tapped her heart with her hand and warmly smiled. We didn't understand what she said yet it felt as if she was saying it was nice to have met us.

Word & Observation of the Day - Combo
The Spanish are not averse to ice like other Europeans. In fact you can get ice just about anywhere. The word is "hielo"; pronounced almost like "yellow." Even when my tea is too hot, they offer me hielo. Love them!!

Tomorrow - off to France!