Yes, this is a blog post about cats (so typical of cutsie blog posts). But hey, I am not afraid to admit I like Cats better than Dogs.

That said, Terrie and I would like to introduce everyone to our newest family members, Edna Mode… 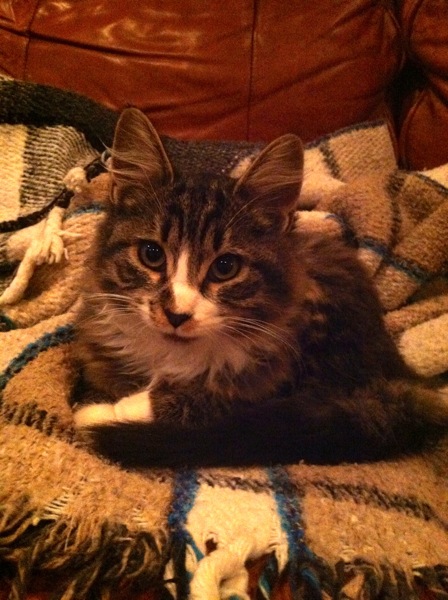 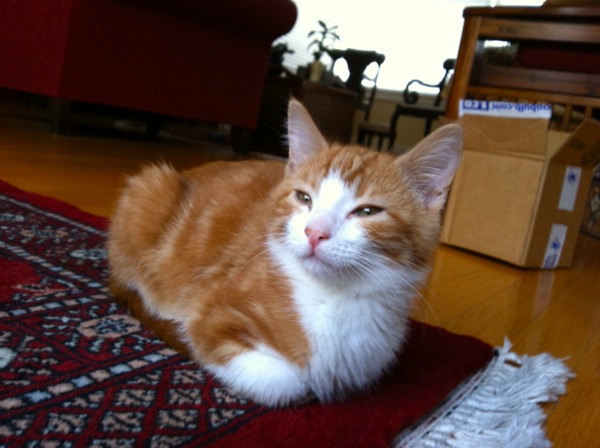 NOTE: Click images for larger versions or go here to see more.
Posted by Squidly Man at 11:44 AM No comments:

This news update covers several states and a number of miles. We’ve been quite busy, too.  The latest new John Deere tractor sits outside the Waterloo, Iowa,  tractor plant for all to see.  We were so delighted to take a tour on a tram pulled by a John Deere tractor, of course!  The entire tram was painted in John Deere colors which really made us seem  a real part of it all.  Sorry, these are the only pictures we could take there, since everything is quite protected from competitors.  They have numerous plants in a number of states and most are tourable.  This particular plant has more than 40 acres under one roof. The most expensive tractor there is  round $550,000. Anyone need one?

The next pics are of the Herbert Hoover house (our 31st president) known as a great engineer and a great humanitarian. He was born here and lived here for several of his early years.  He grew up thru his teen years with an uncle in Newberg, Ore, (!) after becoming an orphan. He made a wonderful mark on history during WWI and all his following years. New Branch, Iowa, is  picturesque and busy “small town USA”. His Presidential Library is very informative and well done. 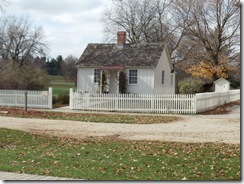 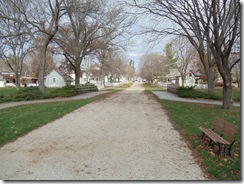 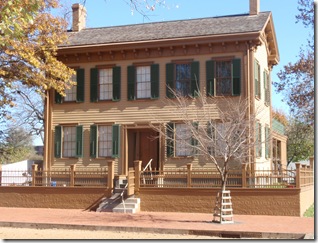 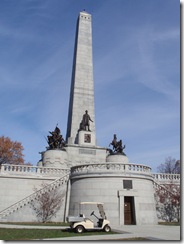 We’ve really been into the Presidents lately!  These two pics above are in Springfield, Illinois.  We thoroughly enjoyed visiting all the Lincoln sights we could.  The first is the only home he and Mary ever owned. The tour was super, the home lovely, and contained more than 60% of their personal belongings.  They lived here during the years after becoming a successful attorney and statesman.  This is also the porch where he met the parades of people from Illinois and elsewhere that desired him to run for president.  The second pic is of his tomb, which is tourable, and very beautiful inside. All of his family but one son are buried here as well; son, Tad, is buried in Arlington National Cemetery. We absolutely loved the Presidential Library there. So fun, so beautiful, and the two theaters terrific! (better than Disney!) 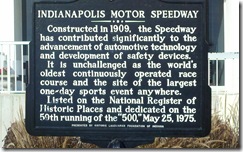 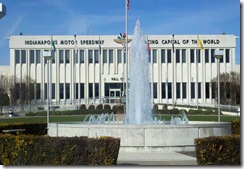 And then…..off we went to racing in Indianapolis, Indiana!  Don’s long-time dream of going to the Indy car races came true!  Well, not quite.  No race that day but still lots to see.  The building pictured above is the Racing Museum and sits in the Indy race track infield.  It is filled with famous race cars, trophies, memorabilia and shops.  Really worth seeing. If anyone is old enough to remember Parnelli Jones from back in the 50’s,60’s & 70’s, his personal collection, cars and all, are displayed there permanently.  Way back in his early years of racing, Don & I used to go see him race at Ascot Raceway in Torrance, and Gardena Race Track in Gardena, California, nearby where we grew up. 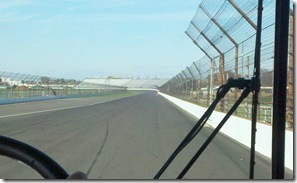 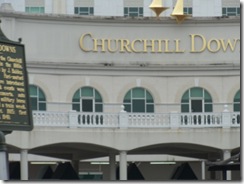 Here we are driving the famous Indy Speedway! ! Yep, we did, one time round the entire track! Looks like we’re doing it in our motorhome, huh?  Pooh! We had to do it in a tour bus!

The second picture is our next race!  We were racing around the beautiful Churchill Downs Horse Racing Area in downtown Louisville, Kentucky.  Actually, just by car, for there was no place to stop, even for a second, due to activities of some sort taking place there that day.  Probably MUCH cheaper for us to just do a drive-by!

While in Louisville we just had to tour the Louisville Slugger Factory and Museum.  We really recommend this to everyone.  It was great to see. It still remains under the same family’s ownership and operation. The Hillerich family got their start in lathe turning of bed rails and spindles in 1855, and then into famous baseball bats when his son hand turned his first bat and gave it to a local player dubbed “The Louisville Slugger” by fans.  An interesting fact: During WWII they produced gun stocks for the army and also billyclubs for military police…..a very different kind of slugger.  Hillerich’s great grandson is the current CEO. The museum was hands- on with all the past and current baseball sluggers represented.  Very well done. 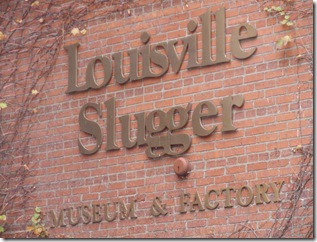 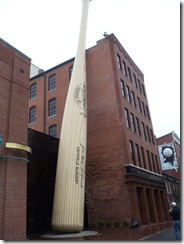 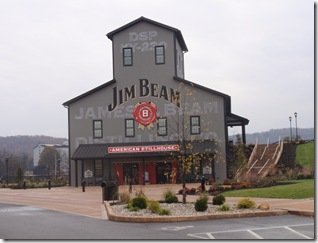 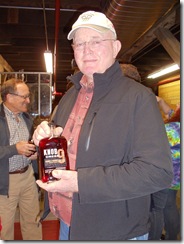 Now, everyone’s going to start worrying about us by the looks of the next two pics.  We were right in the area known as the Bourbon Trail.  This is the area south of Louisville, Ky, where most of American bourbon is made.  This is the oldest and largest bourbon distillery in America.  We had to take a tour, and as you can see, Don got to bottle his own. Of course it would be his if he forked over the $37.50 for it.  We did do some sampling, and I’m happy to say, we’ll let someone else buy it.  One amazing fact I doubt I’ll ever forget: There are more barrels of bourbon aging in Kentucky than there are people in the entire state! 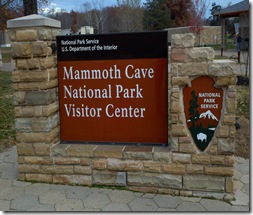 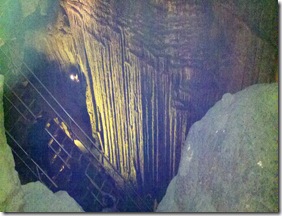 So here we are at Mammoth Caves a little further south in Kentucky.  (An item on my “bucket list” is to see as many national parks as possible.)  We took the shortest tour available, (and quite scenic I might add,) since there are now 390 continuous miles of interlocking tunnels in this cave.  This is the largest known cave in the world. They fully expect to continue discovering new areas in the future. 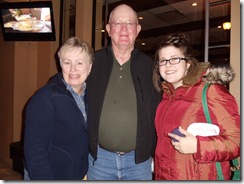 Last, (but certainly not least!) we were delighted to spend some time with a very dear niece, Chelsea Walker, living in Indianapolis, and  Minister to Children at a large and lovely church there.  We are so proud of her.

Sending love and hellos to all,