What We Did Today: We slept in just a little and took our time getting started. Breakfast included spontaneous singing. Yes, we actually sang out loud with strangers, like they do in the movies. Our hostess, Mary, was joking with some guests about leaving and started singing "I'm leaving on a jet plane" then said "everybody now" and much to our surprise every guest in the dining room joined in and sang the entire chorus to that song. I think the response actually surprised Mary and suddenly no one was strangers anymore.

Last night, after chatting with some locals, we decided to forgo the Ring of Kerry and took the road less traveled to the Ring of Beara. The locals passionately shared it is unspoiled, less touristy with no tour busses, and equally if not more beautiful. We can now confirm all of the above are true.

So off we go with Dean behind the wheel this time. He did really well compared to my first day at the helm; however, he didn't get baptized in Ireland's biggest city during rush hour ... in the rain. Yes, I went there. :-)

The views from the Ring of Beara were spectacular, the terrain was barren, windswept, rocky and still quite green. The hillsides, fields and roads were pockmarked with sheep. The roads were super skinny in some parts and wound in every direction. We passed maybe 25 cars, a couple tractors and not one, single tour bus. 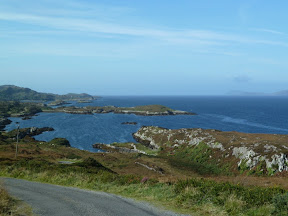 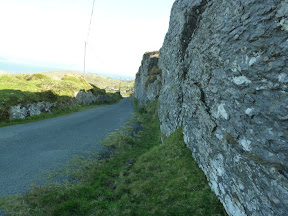 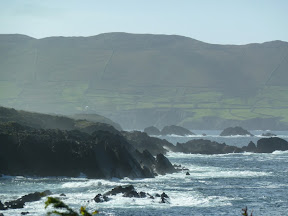 Here we are at the very end of the road. You can hop a cable car to Dursey Island and get the distance to a couple famous cities. The air out here smells so crisp and clean you can feel it move into your body and out to the tips of your fingers and toes. 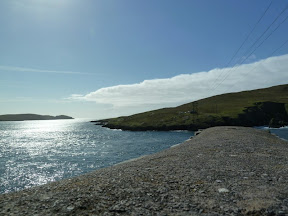 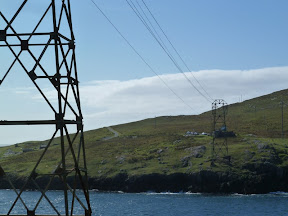 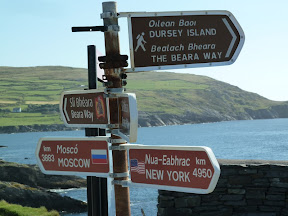 We returned over the Healy Pass. All the white spots you see on the hillside are sheep...Everywhere sheep. 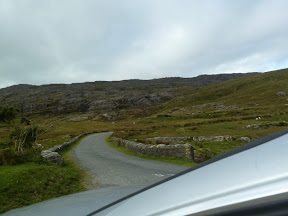 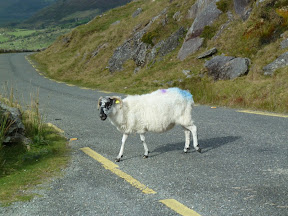 What We Learned Today: Irish myth says cutting or disturbing a Fairy Tree brings very bad luck. Fairy Trees are Hawthorne Trees. We learned this myth/legend/superstition while looking at gorgeous photos in a gallery of the same Hawthorne tree in Summer, Fall and Winter (we bought them). When the Milesians, a mythical race, came to Ireland they banished the natives to the underground and became the Sidhe. The fairy folk who live underground and sometimes reside in certain trees or bushes, usually of the hawthorn variety. You don’t want to disturb the fairy folk or you might bring some kind of misfortunate on yourself. Cutting down one of those fairy trees would certainly disturb them. The Irish would go out of their way not to do that. That’s why you might see a lone tree in the middle of a farmer’s field, the base piled up with stones just to be sure one did not accidentally bump into it.

Word of the Day "You're able for it" means you're up to it. Here's how we heard it. Dean ordered desert (shocking, yes?) and the waitress was explaining one of the chocolate desserts. Before she could finish Dean says, "I'll have that one." She laughed and said "it's not for everyone because it's very decadent warm chocolate and when someone say yes right away I know your able for it." 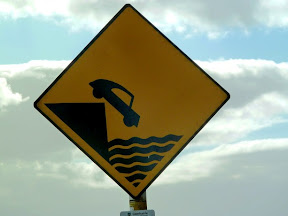 Tomorrow we're off to Dingle.