We started the day off with a "Traditional Ayerrish" (how I hear the word Irish- like a pirate says "aye" followed by "rish") breakfast at our hotel. It included a fried egg, bacon (ham) a veggie sausage , two sausage links, a scoop of baked beans, toast and beverage. Yep, those baked beans were a surprise yet somehow it worked.

Today the raindrops were smaller than gumdrops yet persisted ALL day. Dad destroyed 2 umbrellas in 12 hours. We're still baffled as to how. The baby carriages & strollers here are outfitted with full rain gear. I need to get a picture...we think the rain doesn't stop us in Seattle...well it doesn't even stop babies in Dublin!

What We Did Today: After baked beans for breakfast we were off to the campus of Trinity College where we saw the Book Of Kells. It is a lavishly decorated copy of the 4 gospels written by monks. It is in Latin and was written between the 6th and 9th centuries in Scotland, England and Ireland. We also visited the Long Room in the Trinity College Library. It holds over 200,000 of the library's oldest book. It had that rich smell if old paper and vellum and dust. Dean imagined it to a small version of something you's see at Hogwarts. 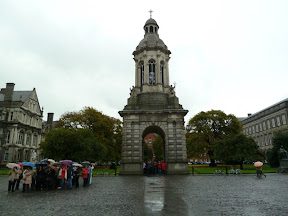 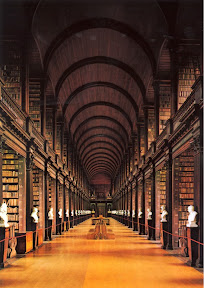 What I Learned Today: My father Dennis is still a catch for the ladies. While waiting in line to view the Book of Kells, a very large tour group of mostly retired women fell in behind us. They didn't speak any English and somehow we figured out they were from Majorca. A few fanned themselves to express how hot it is where they live compared to where we were that moment. As we all squeezed together trying to stay dry and warm when one lady said we were so close together it was like a "grande familia." A couple of these ladies cozied up to my dad and Dean announced he was single. No doubt whatsoever they understood and we all had a great laugh about it. Dennis turned all shades of pink and red with a big goofy grin on his face. We ran into these same ladies 8 hours later on Grafton Street while checking out the shops and the giggling started all over again.

The other thing I learned today, while wide awake from 11pm to 3 am, the Dublin garbage is picked up in the wee hours of the morning. Who knew? 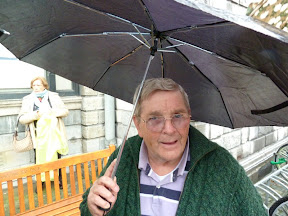 Then we hopped on the bus and rode out to Kilmainham Goal (pronounced jail). Old prisons are fascinating, gruesome places. We learned the history of the prison and heard a condensed version of Ireland's fight for independence from England. Much of that turbulent history is quite recent and so many men, important men - icons - in Irish history, were executed within the prison's walls. The first photo below is part if the original jail, a cell door. Inside a small, dank, over-crowded space, with no heat, no plumbing and only a hard board and blanket to sleep on. The second photo is the section added during the Victorian era and became the structural model for many prisons still in use today. 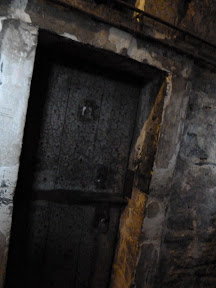 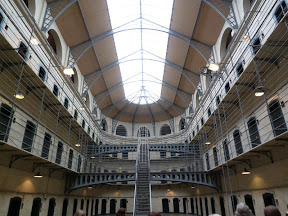 Word of the Day: Today it's two words, Washing Liquid. We heard it on the bus and wondered what kind of soap is that? So I asked the question when I was in a store. The man behind the counter pointed and said "It's Fairy Soap for washin' cuups and tings." (cups and things) It's liquid dish soap, brand name Fairy Soap, and apparently there is one brand not 12 like we have.

We're back in the car tomorrow and will go to Kilkenny.

Note to self, watch the corners.