This is a long one...we just ran out of steam by the time we turned in and the bed was just so comfortable we were out like lights. Here's what we've been up to for 2 days.

Day 8
We were off to a very early start on Monday. We had a long haul to get to the destination of kings and queens. It started off as another "soft day" with some whipping wind and long breaks of sunshine between.

What we Did on Day 8: Breakfast included black pudding ... not sure how I feel about it yet, it taste kind of funky. Part of the difficulty eating it is knowing what's in it.

Originally we were going to drive straight to our destination; however, the weather was cooperating with us so we took a detour to see the Cliffs of Moher a day early. As we got closer to our stop we drove through a wicked rain squall and just before arriving at the Cliffs, the sun came back out for 30 minutes. We had another 5 minute squall while on the Cliffs and were fortunate to have refuge inside O'Brien's Tower. Again with the great weather timing. The cliffs rise to 700 feet at the highest point and range for 8 miles over the Atlantic Ocean. I had forgotten how fresh the Atlantic smells compared to the briny scent of the Pacific. I would have loved to have more time to walk the entire cliff side. 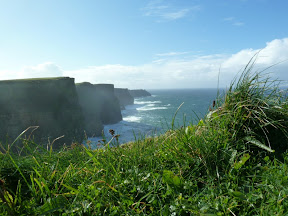 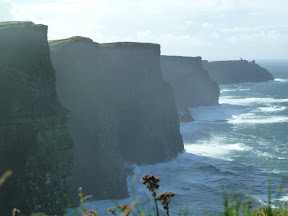 O'Brien's Tower stands near the highest point on the Cliffs. It was built in 1845 by the landlord of the locality, Cornelius O'Brien, a descendent of the first High King of Ireland. It was built as an observation tower for visitors who were, even then, flocking to the Cliffs. 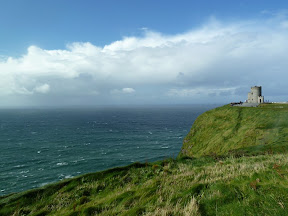 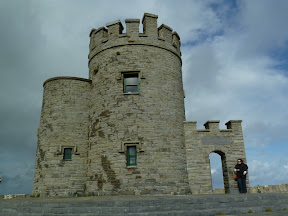 We arrived at Ashford Castle around 4:30 pm. We were greeted at the front by someone who unpacked the trunck and took the car away. Check in was a very personalized and formal affair, as we all sat at a desk to take care of business. Then we were given a brief tour of the main floor, restaurant locations and received a brief history of the castle as we were guided to our rooms. We had an unobstructed view of Lough Corrib (a lake). The rooms are decorated in a classical style and have all sorts of comforts, including American electrical outlets for our gizmos.


We had dinner in the dungeon . . . although it doesn't look like much of a dungeon now.

What We Learned Today: In 1228 Ashford was founded by the Anglo-Norman de Burgo family following their defeat of the native O'Connors. In 1589, after more than 3.5 centuries under the de Burgos, Ashford passed into new hands after a fierce battle of forces between the de Burgos and the English. Ashford changed hands a few more times then in 1915 the castle was established as a first class hotel and has remained as such to this day. Additional wings were added on throughout the years and it now has 386 rooms. Our room was in the original part of the castle.

Word for the Day: We saw a road sign that read "Dipped Lights." Needless to say we were thoroughly confused until we deciphered the graphic which accompanied the words. It means use the low beams on your head lights.


Day 9
It rained hard overnight and we awoke to clearing skies with high passing clouds.

What We Did Today: We headed down to the formal dining room for breakfast. It is called The George V Room (dinner jackets required for evening meals). This was one of the best breakfasts yet and I tried black pudding and white pudding. Knowing we were getting the best of the best at Ashford Castle, I now know I do not care for black pudding and actually like white pudding (little more spicy and it has pork in it).

After breakfast we took a long walk around the grounds and made our way to the Irish School of Falconry, also on the property. The photo below is what we believe to be the back of the castle and it is the side we drove in on. 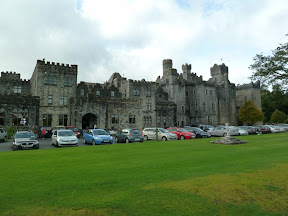 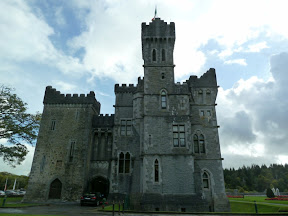 Views from the lake looking back at the castle. 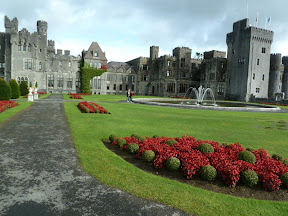 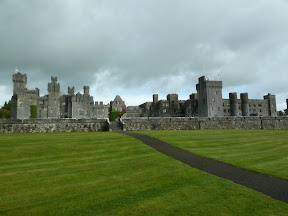 What We Learned Today: Below is a very condensed version of what we learned today. We did a Hawk Walk with the Irish School of Falconry. This was one of the most amazing experiences we've had and we learned so much about hawks, falcons and owls in just one hour with them.

The hawks we flew are Harris Hawks and originate in Southwest U.S. and South America. They are social birds and hunt in packs. The female birds are always larger and rule the group. This means the "alpha" bird is always a female. And she will always take the highest perch so she can see everyone in her group.

Hawks have long tail feathers which allow them to stop on a dime to catch their prey. When you see them fly through the woods you get a real appreciation for their tail. They tuck their wings in and use their long tail feathers as a rudder to steer at fast speeds through the trees and branches. Hawks are essentially lazy birds and only fly to eat so they can be taught to take off and land on a gloved hand in just 2 weeks time. They'd much rather go for the easy meal in the glove than hunt and kill. They also have an ideal flying weight which the Falconers do their best to maintain so the birds are much more likely to come back to the glove for their food.

Dean has Inca, who is from Peru. Notice her copper-brown color. I have Maya, she's a bit bigger and darker in color. 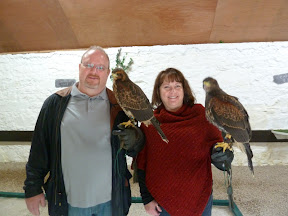 This next series of photos is Inca taking off from my glove and Maya coming in to my glove. Maya spotted me first and came in for the little chunk of raw meat she knew I had in my fist. Inca played hard to get a few times while we were out and it may have been because she wasn't as hungry. 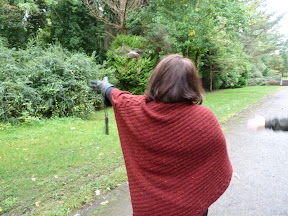 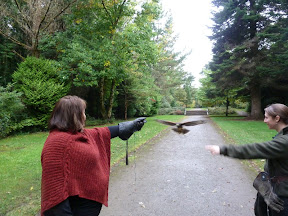 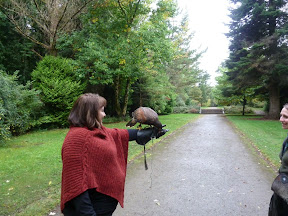 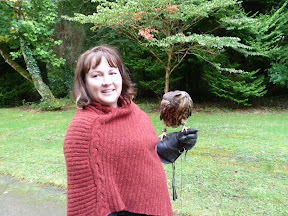 Here are Inca and Maya when they were babies. They were born in May. They are only a couple inches tall when they hatch and are full grown in 8 weeks. They're also really vocal when they are young. 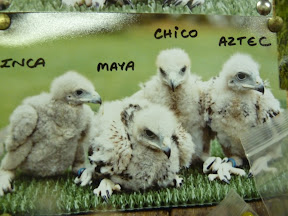 The rain stayed at bay until we had the birds in hand and the sky let loose on us. It came down so hard we even got drenched in the dense forest. My hair was dripping by the time we got back to the School of Falconry. We both wholeheartedly agreed...it was SO WORTH IT! I'd do that again in a heart beat. Afterwards we hitched a ride back to the castle, had a pint of Smithwick's, dried off just a little then hit the road for Galway. We were so wiped out by the time we got here, and it was raining again, we opted to watch a movie on TV and have dinner in the hotel restaurant. Turns out the Park House Hotel was built around the restaurant and the locals come here for dinner. We agree, dinner was yummy yet again!

Word for the Day: Bet you've heard this one, Torch = Flashlight. I also realized the Irish say "sorry" rather then "excuse me" to get past you or if you are in the way and they need/want you to move. I was standing on a street corner in Kilkenny and a woman said "sorry" like 3-4 times and obviously I was a little slow on the uptake and didn't realize she was talking to me or the fact I was in her way.

Tomorrow we're off to the Northern 6.