Bet you've been wondering what happened to us up in the Northern Six, huh? Well we had a couple, long and fabulous days seeing the sights and meeting a man we believe may be distant McVerry cousin!

Day 11
Started out super foggy and by the time we reached our first destination the sun was out and stayed out.

What We Did on Day 11: We headed up to Derry-Londonderry. What the Irish call it depends who you talk to and sometimes it depends on whether they're Catholic or Protestant. Generally it's known as Derry and is sometimes referred to as the "Walled City". It is the 2nd largest city in Northern Ireland and sits along the River Foyle. The English displaced the Irish Catholics and built a wall to protect the English & Scottish settlers. The wall was built between 1613-1619 and is about 12 feet high and roughly 20 feet thick. It is the only wall surrounding a city in Ireland which is fully intact and in it's original state.

Derry is a border town which has seen much conflict, destruction, hatred, rebuilding and efforts to bridge divides which have occurred in very recent decades. 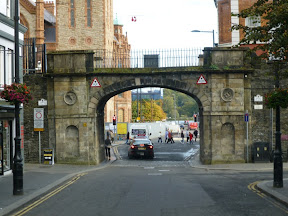 Despite the efforts to move forward and put the hate aside, everyone we met said it will be at least 2-3 generations before it is somewhat dispelled. So much emotion is still too close to the surface.

The monument below is called Hands Across the Divide. It is a metal sculpture of two figures extending their hands to each other, inspired by the growing hope for peace and reconciliation in Northern Ireland. I find it interesting that they're not actually touching. 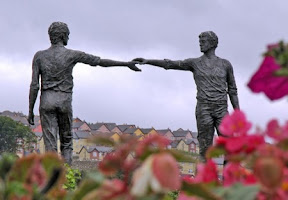 Our tour then entered the Bogside, a Catholic neighbohood outside the city walls of Derry. The area has been a focus point for many of the events of "The Troubles", from the Battle of the Bogside and Bloody Sunday. These are all events we are likely old enough to remember. 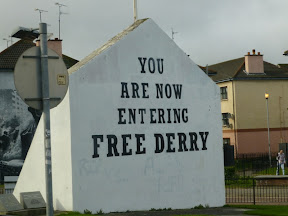 This one is called Bloody Sunday. It shows Father Edward Daly waving a blood-stained white handkerchief while trying to escort the mortally wounded Jackie Duddy to safety. Jackie Duddy was the first fatality that Sunday. 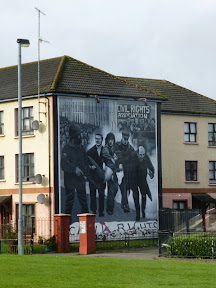 This mural includes the Bird of Peace which is rising from the darkness into a brighter future. 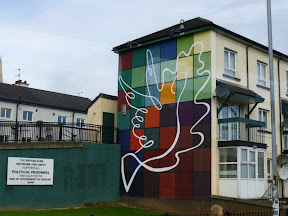 Then we headed over to the Protestant side of the river. Somewhere along the way the sides of the river were named the East Bank and the West Bank to mimic the Gaza Strip where conflict and violence are so prevalent. The mural below I believe is called the Peace Mural and each square in the banner tells the historical tale of the city and the bridge in the center is call the Peace Bridge. It's an actual foot bridge which connects the east and west sides of the river. 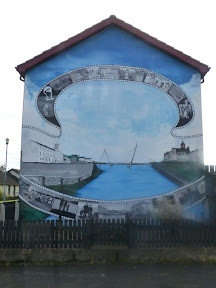 After the tour of Derry-Londonderry, we drove north to the Giant's Causeway. The Causeway coastline is stunning and considered to be the most windy place in Ireland. It is steeped in myth and legend. Legend: Carved from the coast by the mighty giant, Finn McCool, who left behind an ancient home full of folklore. Science: A geological wonder with over 40,000 interlocking basalt columns, it is the result of intense volcanic and geological activity. It is a glimpse of 60 million years of the cooling and shrinking of successive lava flows. 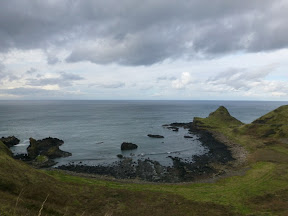 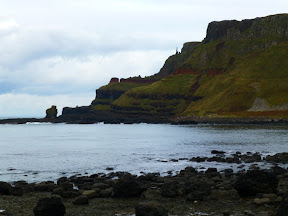 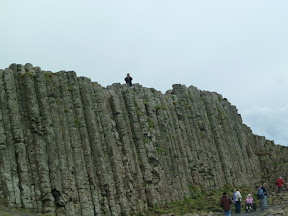 Here we are sitting on Finn's boot 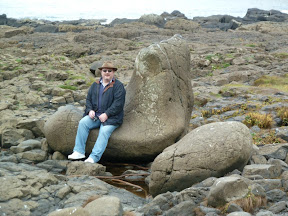 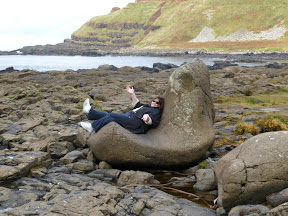 What We Learned Today: We learned so much more than mentioned above; however, we thought this tidbit of info connected to America was cool. Turns out Derry is also known for the linen and shirt making trade. One of the factories actually supplied shirts to both Union and Confederate armies during the Civil War. We figured out gas cost about $8.52/gallon in Northern Ireland, which uses the English Pound for currency.

Oh!! We saw a Dollar Store, guess what it's called - yep, the Pound Store.

Word for the Day:
To let = for lease; "Apartment to let."
To hire = to rent; "We hired a car when we traveled to San Francisco."


Day 12
Was sunny when we hit the road, rained a little in the middle of the day and ended up sunny again.

What We Did on Day 12: We headed to Belfast to see the Titanic Center. This is a fantastic tribute to the ship building industry in Belfast. It's by far one of the best exhibits/museums we've been to. It included all types of multi-media presentations including a short theme park type ride (geared for those higher in age), movies, interactive displays, and samples of what the rooms looked line on these luxury liners. It took a couple hours to see the whole exhibit.

The building is very cool. The corners look like a big ship cutting through the water and there are small ponds which surround each corner as if the ship sitting in dry dock just waiting for a push. 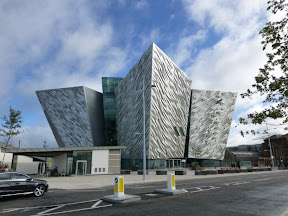 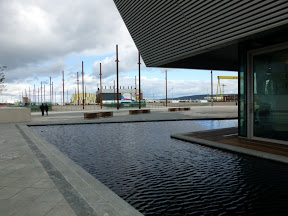 Two the cranes which were so important to the industry still stand as a reminder to the people of Belfast. They are called Sampson and Goliath. 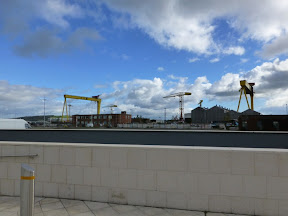 What We Learned Today: Geez, where to start! We chose to head back towards Armagh after the Titanic Center and Dean says let's go through Belleek (County Armagh) where you're family is from and just see what we see. So we do, we park the car, look up and see a small business with the McVerry name on the sign. Freaky? Not yet... We found the small perish church in this tiny little town and decide to go inside and look around, then we take a stroll through the cemetery. Much to our surprise we find it's full of McVerry headstones. We couldn't believe it. As we're wandering through, a man and his son come in and stop in front of one the McVerry headstones. Dennis wanders over to him tell him what we're doing and to see if he just might be related. Well after 40 minutes of conversation and lining up what we both knew, we pretty much determined he's probably a distant cousin! His grand uncle was possibly the brother of my great grandfather (keep in mind we found out on Day 10 my great grandfather was one of 11 children born over a 20-year span). This man, Declan McVerry, invited us back to his home (not house) for tea with he and his wife where we chatted for another hour and a half comparing notes and sharing pictures. He had a picture of my great-great grandmother and is in the process of attempting to get one of my great-great grandfather. Seriously, what are the odds at 3:40 pm on a random Friday afternoon we'd run into a distant family member, in a tiny cemetery in Ireland. How's that for freaky? We exchanged contact info and promised to keep each other informed as we dig up pieces and try to connect our families. A true pot of gold for sure!

St. Laurence O'Toole Church in Belleek, Parish of , built in 1849 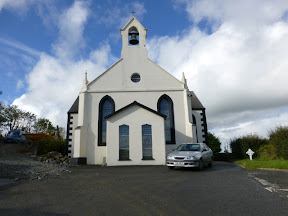 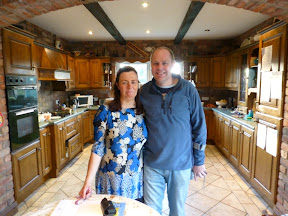 Word for the Day: Up Market = up scale; "I stayed in this really up market hotel last night."


Day 13
We woke up to a chilly, bright sunny morning. What fantastic weather for our last full day in Ireland.

What We Did Today: Declan McVerry told us about a grave stone for one of my great-great uncles in a town not too far from where we were staying. We decided to see if we could find it. After tromping through 2 graveyards and no luck, we made the trek to Dublin. We had a good dinner and early in the morning we'll be headed to the Airport. Dean and I are excited to see Italy again.

What We Learned While Here: Ireland is a gorgeous country with an amazing history which is so very close to it's people's hearts. It is remarkable how each person we met carries the very distant and very recent past of their country with them. The other thing which surprised me was how acutely aware they are of American politics and the world beyond their own borders. The people are warm, open and have quick humor. There were times we thought everyone must have kissed the blarney stone because they do have the gift of gab.

Man, they know how to make a good ale, Smithwick's rocks!!

They have this uninhibited willingness to share who they are and tell you they're collective and personal stories. It made each person we met memorable in a way that will stick for a long time to come.