Who knew that German Pancakes (a.k.a. "Dutch Babies") originated in the Pacific NorthWest!? Apparently, according to Wikipedia, this is true.

German Pancakes have been a staple of the "Flaming Family" diet ever since my sister brought the recipe home from her High School Homec/Cooking class 30-some-odd years ago (back in the day when they "taught" housewife skills in school). 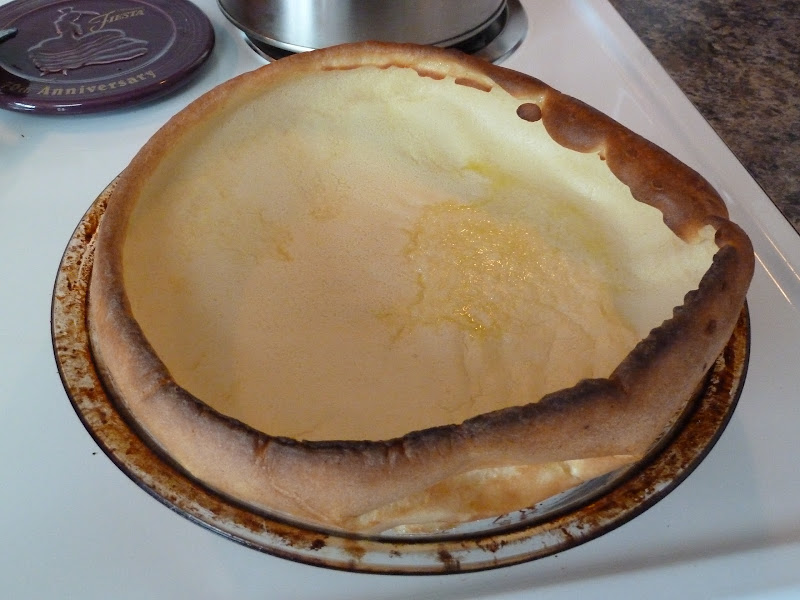 Mix the above ingredients into a blender, Kitchen Aide with wire whip, or food processor with wire whip. Blend/Mix on high for approximately 3 minutes or so making certain that all of the ingredients get mixed together. If using a blender, make sure not to run the blender much longer than 3 minutes and to remove the container when done blending as the hot motor will make the batter rise – which can be disastrous if you have a full blender.

Add about 1 TBSP of butter in pie plates for 45 – 60 seconds before pouring batter into pie plates. Make sure not to burn the butter. Margarine can be used in place of butter and doesn’t burn as easily. Its recommend to not use lard (such as Crisco) as the Margarine/Butter also adds much needed flavor.

Preheat oven to 450 degrees Fahrenheit. Add about ¾ Cup to 1¼ Cup of batter per pie plate (depending on size of plate) after butter has melted. Cook for about 10 minutes. Keep an eye on the Pancakes to make sure the top edges are not getting burned. You may need to adjust the time and/or temperature to get them to rise to your liking.

Powdered sugar and fresh squeezed lemons are a standard and excellent. Other fruit can be used such as most any berry (strawberries, raspberries, blueberries, etc.), bananas, watermelon, etc. Tart berries such as strawberries, raspberries, and blueberries taste better on German Pancakes when sweetened with a little bit of sugar to bring out the berry juices. Most any fruit will go well with either powdered sugar or whipped cream (or both!). Other toppings such as syrup or jellies, including peanut butter have also been used. I've also tried Fried Apples (made with Cinnamon, Butter, and Brown Sugar) as a topping - which is quite wonderful!

This recipe makes just barely enough for two pancakes. If you want to make enough for four people, quadruple the recipe so there are enough for most everyone to have seconds. We can’t let the fruit go to waste! ☺

The recipe will not work with milk. It has been tried and the pancakes do not come out correctly. Also, I like to sneak in a couple of table spoons of powdered sugar into the batter to help them rise when cooking. It also makes the pancakes sweeter and balances out the salt.

It’s a messy job both in and out of the oven - but well worth the effort! ☺

Email ThisBlogThis!Share to TwitterShare to FacebookShare to Pinterest
Labels: Food