I think the little Computer Bugs are on the loose.  No sooner did I finally bring my email server up from the 4 failed attempts at moving it to a new Virtual Server Host, then my firewall's intrusion protection system went haywire and knocked me off the Internet until now.

Sometimes I just want to pull one of my brother's stunts from our childhood and throw a Rubik's Cube into the wall. 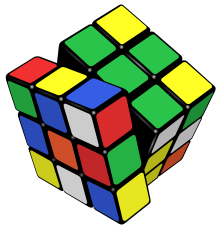 Wouldn't you just love to watch this thing blow up into a million pieces?  :-D
Posted by Squidly Man at 2:05 AM