Life is good when you have food...A bobcat with a fresh kill


OK here we go! My first Blog entry. The first one on my own anyway.

I had a stoke of good luck last Thursday morning while driving in to check my cameras, I noticed a dead deer just off the side of the road and sense it is a fairly active logging road I first thought that it was hit by a car but upon closer inspection and reading tracks in the light snow that deer had been killed by a bobcat! The tracks told the story, the cat was in the ditch on the opposite side of the road, the deer tracks came out of the brush in a normal walking gait but once at the ditch it lept pronk. From there on the shoulder of the road the cat must of been on the deer because the of the sign was only from the deer and quite erratic at that, after about 25' of chaos the deer lay dead.

This picture shows how the cat left it's kill partially covered. How it looked when I found it. 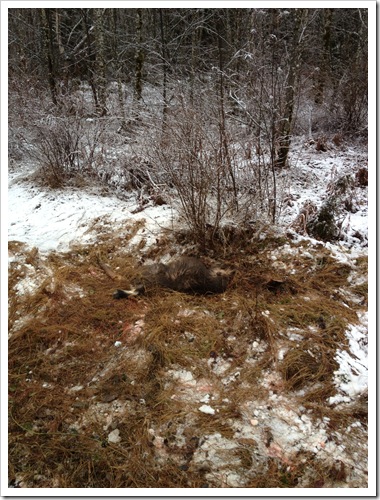 Without the snow I would of assumed a cougar had killed it. Well what to do now? That's easy, Put a camera on it right? Well it’s right on the side of the road and I didn't have one with me but I am going in to check a couple so I'll just bring one out  and set it up later but first things first. I stashed the deer behind some brush to get it off the side of the road. A couple of hours later after checking my cameras and bringing one out I return to the kill and find that the cat has been back and feeding!  Assuming that I have scared it off it's kill and it is probably close by I'm being cautious. After a few minutes of looking around I'm thinking the coast is clear (yeah right, bobcats are hard to see when they're moving and practically disappear when they stop) bending over to put a couple of loops of cord on the deer's hind legs to move it further from the road I hear this low guttural growl coming from the brush about 25 yards away! WHOA!! That's directed at me! Time to finish up this set but first I'll get my shotgun from the car. Well I got everything setup without getting attacked, and returned March 4th to change out cards and batteries, 700+ pictures in 72 hrs!  I Should of extended the camera delay a bit but what the heck digital images are free. Most have fog on the lens because I forgot my rainx wipes but still very happy with the results. This cat is quite adamant about covering up his kill which is probably because he is tired of me moving it.

This is a picture of my set up when I left last Sunday. My camera foreground left, notice how well the deer is covered. 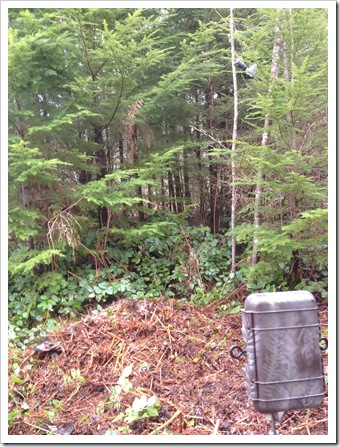 This is the culprit, To put this into perspective Bobcats weigh in between 20 and 30 lbs. This cat  is probably in the high twenties not counting all the venison in his stomach the deer is a mature doe that I guessed to weigh around 85 to 90 lbs. 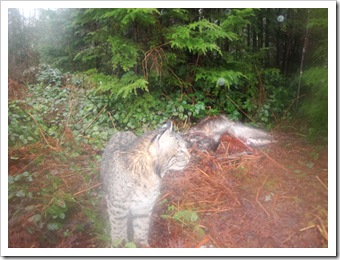 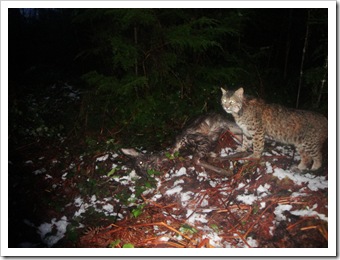 These two show the cat lounging with it’s kill, life is good when you have food! 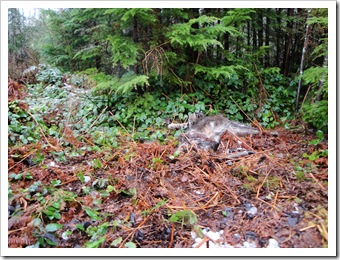 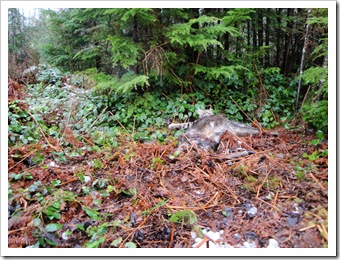 There’s more to this story, Stay tuned for more! (yeah that was old Paul Harvey line) oh and sorry for all the false posts, Dean had to help after all. Dave

Posted by David Flaming at 2:08 PM