After a somewhat leisurely morning we headed outside the Chateau to see a bit more of the grounds.  The clouds were giving way just a skosh and the rain stopped pouring down, so we took advantage.  Here are some great shots from around the resort offering a small taste of the gorgeous majesty that surrounds Lake Louise.  Fresh snow fell on the glacier overnight. 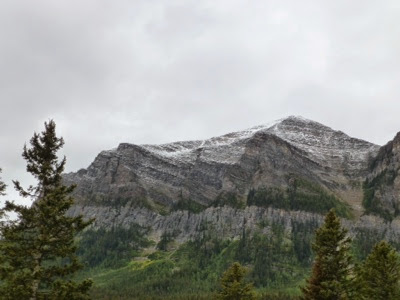 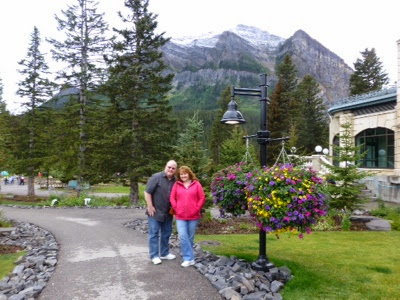 Victoria Glacier from the far end of LakeLouise 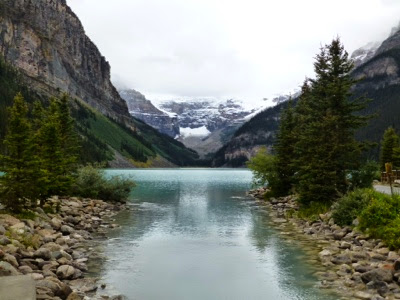 We headed northwest out of Lake Louise towards Jasper.  The drive was 145 miles of the most spectacular scenery full of pristine mountain lakes, ancient glaciers, stunning mountain peaks and broad sweeping valleys.  The route between Lake Louise and Jasper is completely within the Canadian National Park system and leads us up the Icefields Parkway from Banff National Park right into Jasper National Park.  We spotted caribou in a lake and a small black bear crossing the highway as we pulled into Jasper.  Here are a few shots of our drive. 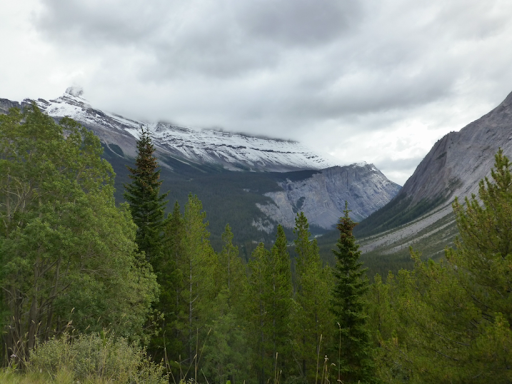 Below is part of the Columbia Icefield and photos of Athabasca Glacier.  This glacier is one of six principal "toes" of the Icefield in the Canadian Rockies.  The glacial toes are Athabasca, Castelguard, Columbia, Dome, Stutfield and Saskatchewan.  The Athabasca Glacier is approximatley 3.7 miles long, covers an area of 2.3 square miles, is measured to be 300-900 feet deep, receives up to 275 inches of snowfall per year and recedes about 16 feet per year.  It is also the most accessible toe.  Yes you can walk up to the edge of the glacier or even take a special snow vehicle right out onto the glacier.  If you look closely in the second photo below you'll see the bus on the glacier. 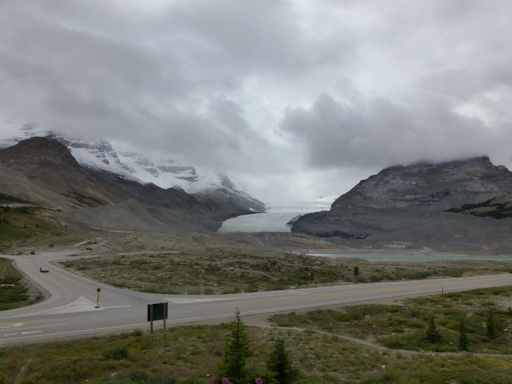 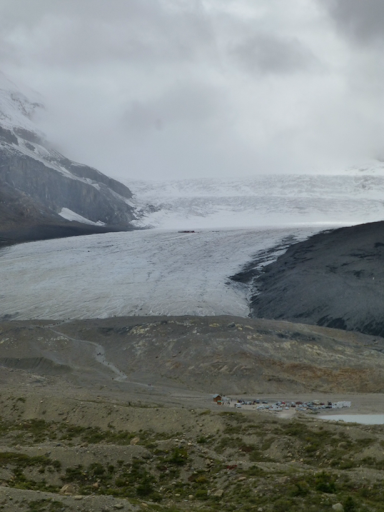 Today we went a few minutes out of town to the Jasper SkyTram.  Opened in 1964, the gondola whisks you up Whistler's Peak to 7,500 feet in 7.5 minutes.  Then there is a 656 foot trek to the summit at 8,100 feet.  The climb gets steeper and steeper as the path ascends to the summit.  It was a tough, lung burning hike which rewards the effort with 360 degrees views of the Canadian Rockies, including Mount Robson (highest in Canadian Rockies at 12,972 feet).

Dean was certain he would die long before reaching the top then we were both unsure our legs would hold up on the way back down, as they turned into shaky noodles.  The town of Jasper appears to be shaped like a boomerang, which reportedly serves to "catch all the Australians".  There are a LOT of Australians in Jasper; they come for the busy tourist season.  The town grows from 5,000 to 25,000 during the summer.  The weather at the top SkyTram station was at 32 degrees with a wind chill going well below freezing.  I bought a new coat in Banff and was greatful to have it on this day.  We had a terrific lunch at the Treeline Restaurant.  The restaurant sits in the second floor of the SkyTram station just as the treeline begins ... or ends depending on your approach.

The structure you see at the top of the hill in the photo below is just a tower ... the summit station is much higher and not visible from the starting point. 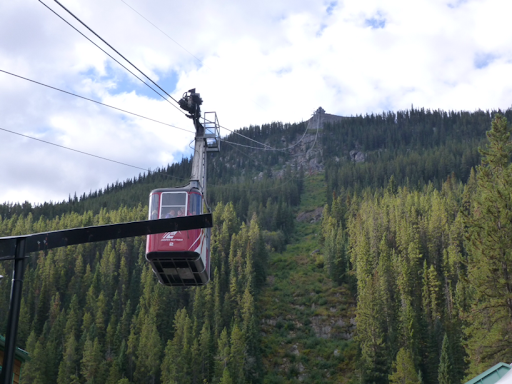 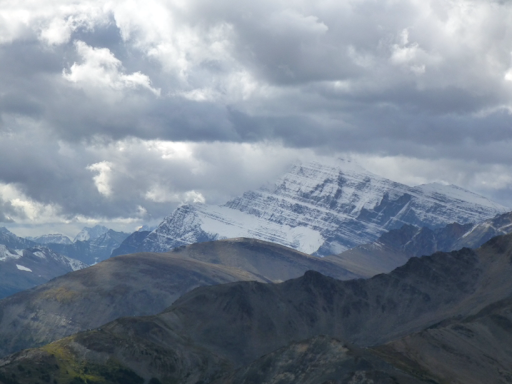 Pyramid Mountain to the left 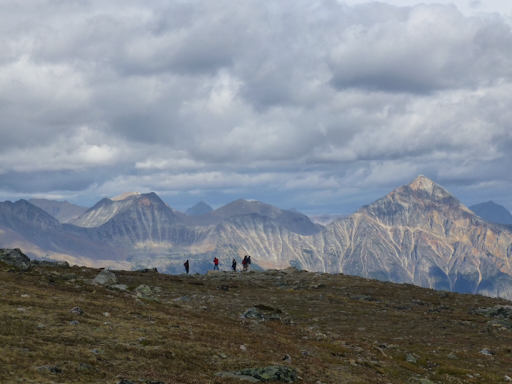 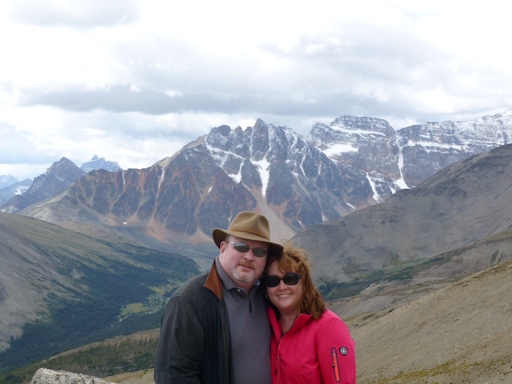 After getting back down the mountian we drove to Pyramid and Patricia Lakes.  Below are shots of Pyramid Lake 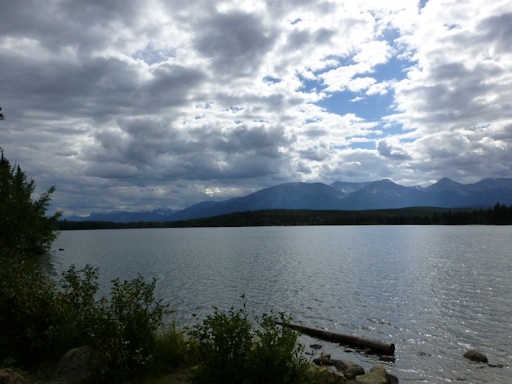 Me in front of Pyramid Mountain at the end of Pyramid Island  ... on Pyramid Lake 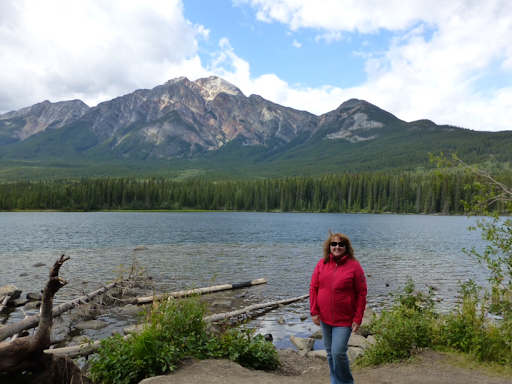 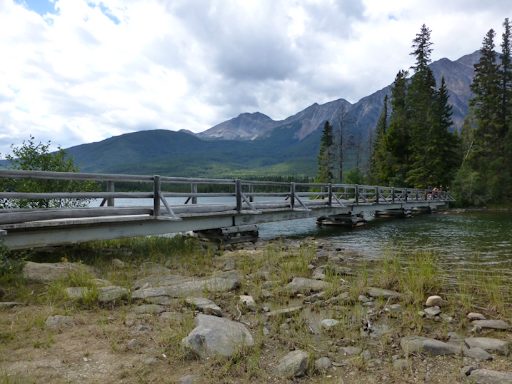 We were exhausted by this point so we decided to go over to the Fairmont Jasper Park Lodge for a cocktail.  Beautiful setting for a hotel and it has an authentic rustic mountain feel.  Though we both agreed it was not nearly as appealing as the Lake Louise Chateau.  Tomorrow we come back down from the Rockies to western British Columbia to Kamloops.  We'll catch you up in a couple days.
Posted by Terrie F. at 7:23 PM