Was a driving day.  We drove 275 miles from Jasper to Kamloops.  It was a beautiful drive and two lanes pretty much the whole way.  We went from 32 degrees in Jasper to 80 degrees in Kamloops.  It's a fairly large town but not particularly distinguishable from some others we've driven through.  This was our stop over spot before heading to Vancouver.  We had a good dinner then spent a sedate evening in our room facing the river and reading.  It was nice to be still for a few hours.

We had a beautiful morning start on the South Thompson river in Kamloops and a delicious breakfast.  We met couples from France and Switzerland who were traveling to Jasper from Kamloops.  The conversation was interesting and breakfast was quite tastey.  We headed to Vancouver this day to catch the ferry over to Vancouver Island with our destination in Duncan (267 miles).  It was a gorgeous day for a ferry ride through the San Juans.

Below are shots from the B&B in Kamloops of the river. 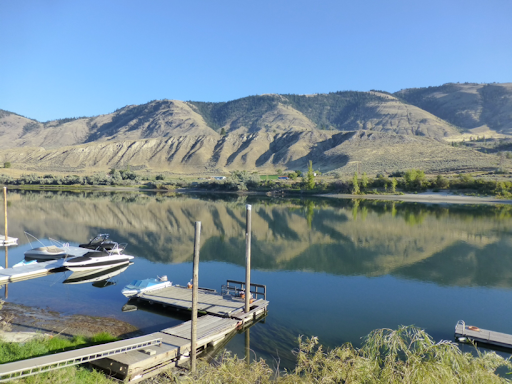 We went to the Pacific Northwest Raptors "park" in Duncan, BC today.  We spent most of the day visiting the birds, holding/handling the birds, flying the birds and even making a couple birds "laugh".  Jamie was our expert handler and showed us the ropes.

This is Gollum, a Harris Hawk; nickname Gaullie.  This is the guy we flew through the woods. 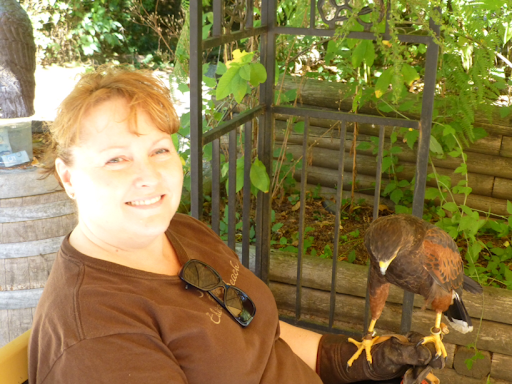 This is Elton.  He was a total sweetheart.  Very few raptors like to be touched (petted) but Elton loved to have the top of his beak rubbed.  He make a sound like he was purring, would close his eyes and tilt his head so you could get a good angle on it. 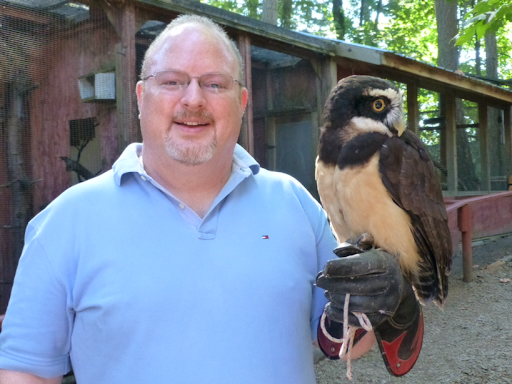 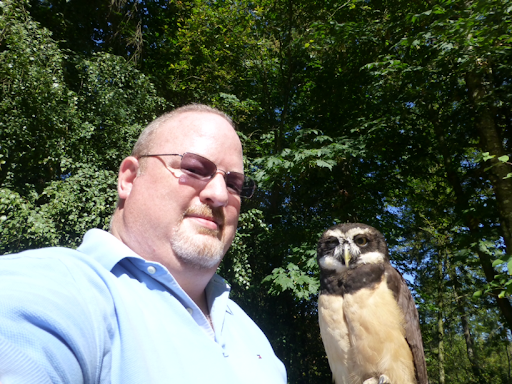 Elton enjoying the sun after a beak rub 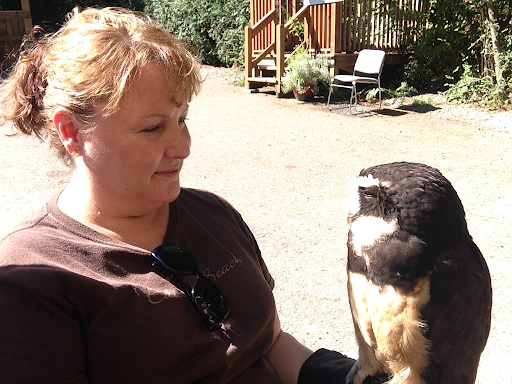 The Kukaburra's are adorable and had a whole vocabulary of sounds.  At times they sounded like cats with a deep meowing sound.  You could also get them to laugh by trilling and rolling an 'r' sound at a high pitch.  The are Boomer and Roo.  The male has the longer stripe of black feathers under his eyes.  Watch the video below, Terrie got them to laugh. 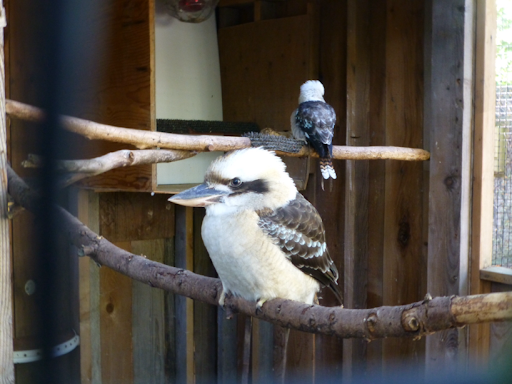 This is Arctos, the Great Horned Owl.  He's about 4 months old and is just learning the ropes of being trained to the glove.  Out handler said training owls is like training cats.  They think totally differently than the other raptors and are easily distracted by other things going on.  They hunt by sound rather than relying on their eye sight, and actually have a blind spot up close to their face.  The move their whole body to see and it looks like they're dancing. 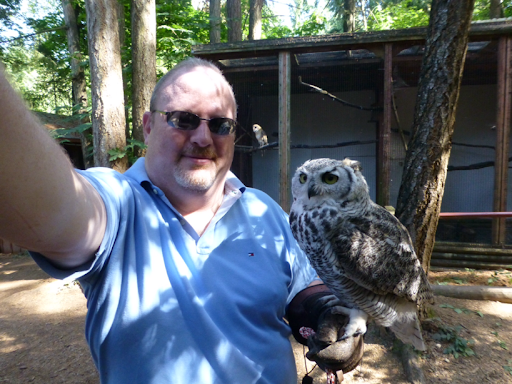 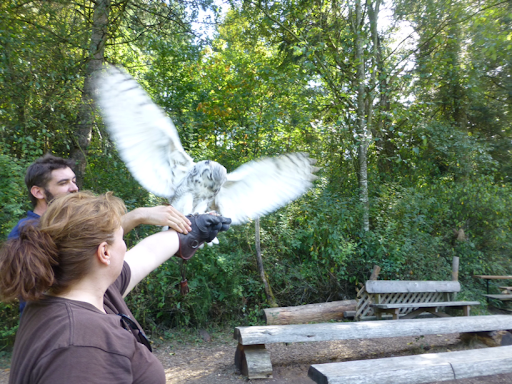 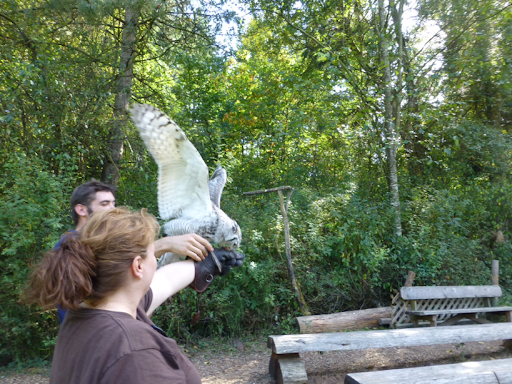 We also got to feed a Maribou Stork named Gaston.  Our handler was a bit apprehensive about letting strangers into his pen.  Gaston stands about 4½ feet tall and has a wing span of 10 feet. This raptor handled us strangers like a champ and easlily gobbled down ½ a raw chicken. 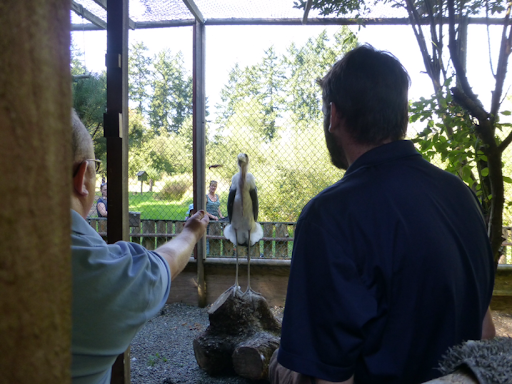 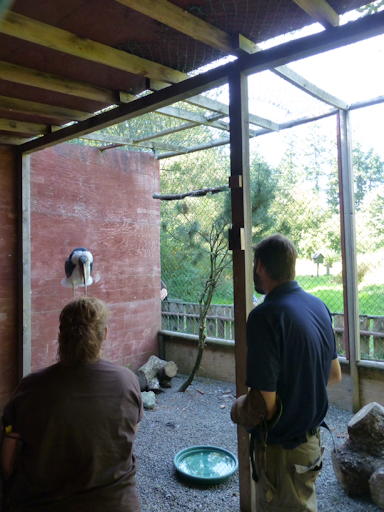 We watched a flying demonstration with a bald eagle, a barn owl, a harris hawk, a perriguine falcon (fasted bird on the planet) and a turkey vulture.  All equally fascinating.  Also got very up close with a fully grown, three month old Golden Eagle named Ares.  This santuary has about 120 birds, some are rescues, some are movie stars and some are paid to work at airports and landfills, chasing away nuisance birds.  It was a fascinating day and we hope to visit again.

Tomorrow we're off to Victoria, BC then home on Tuesday.  It's been an outstanding trip.  We met interesting people, saw some amazingly beautifyl places on this planet and had some unique experiences.  We'll definitely be back to Canada someday soon.
Posted by Terrie F. at 7:37 PM