It has been quite some time since our last update. We were in Florida for about a month and a half: a month in the Hudson area (north of Tampa) and two weeks in Flagler Beach (a bit south of St Augustine).  We’ve had fun times exploring up and down both the Gulf side and the Atlantic Coast of Florida, and enjoying many days of lovely weather.

We found a lovely state park to view manatee in their habitats of warm waters. The one above was actually feeding on alga on the submerged log.  His head is coming up for air (at the top of the screen) and he is much bigger than he appears.  They are quite friendly creatures, have no predators and their biggest hazard are boat propellers.  Every large manatee we saw had a number of scars from close calls.  The next two old lovely homes are Thomas Edison’s and Henry Ford’s winter homes in Ft. Meyers, Fl.  We were able to view them through open windows and doors on walk-around porches.They were lovely to see.  The grounds were planted with exotic plants from around the world, to further the search for an economical source of rubber for car tires!  The laboratories and museum explained the processes of research and testing. Mr. Firestone was also a partner in this. 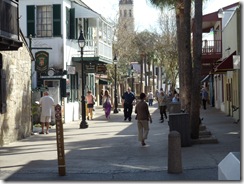 The street view is of the oldest town in America, St. Augustine.  It was founded in the early 1560’s.  There is so much to see there, including the oldest house (over 400 yrs old) in America, a wonderful 1600’s Spanish Fort, a gorgeous bay where Indians used to fish, world explorers entered and claimed for Spain (Ponce de Leon in 1513), then France, then England, and pirates,as well as gorgeous early 1900’s luxury hotels and churches built by Henry Flagler ~ partner in Standard Oil ~  for the rich and famous in his day and still in operation today. 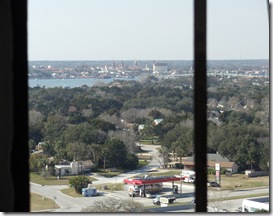 We climbed the lovely St. Augustine Lighthouse (1870’s) and toured the keepers’ house and buildings. (This lighthouse was built by James Gould, for all you Eugenia Price readers)  The view from the lighthouse is looking west toward St. Augustine and Matanzas Bay. 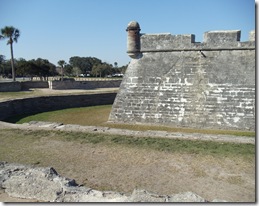 The old fort, Castillo de San Marcos, situated there on the Matanzas Bay is too huge to capture with our cameras.  It truly is a delightful thing to tour, built in the shape of a star, with several levels, dozens of cannons, wall etchings by soldiers from many eras, and even draw-gate entrances and a moat! It is one of our all-time favorite forts to visit.
Posted by Don Flaming at 6:57 PM

Email ThisBlogThis!Share to TwitterShare to FacebookShare to Pinterest
Labels: Don and Gail Travels