This is the Ponce de Leon Lighthouse on the Ponce Inlet further south on the Atlantic Coast.  It was completed in 1887 and is Florida’s tallest with over 203 steps to climb.  The views were spectacular!  This is one of the few lighthouses in America with all the original buildings preserved. For years before electrically lit, keepers carried 30 pound buckets of hot oil up to the lens burner every 2 1/2 hrs around the clock! Amazingly, even their wives did this at times. Both these lighthouses are still in operation today, operated (electrically) by private organizations for the Coast Guard but still using their original Fresnel lenses. 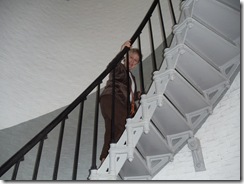 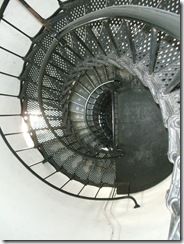 We spent a fast-paced day at Daytona Speedway.  What a great tour it was, seeing all there was to see: the entrance tunnel, garages, infield, VIP boxes, pre-race driver’s meeting room, and cars racing round the track with those who wished to go FAST in real race cars (The Richard Petty Racing Experience).  The cost for those special laps around the famous track was $500-$2200!  We thought we might just save that for another day! 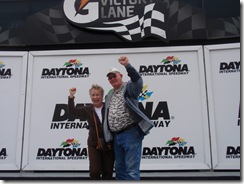 Here we are in Winner’s Circle, where all the glory takes place.  Fun!!!  The beach shot is Daytona Beach, where NASCAR racing began!

We’ve stopped at a number of very old sugar cane mills all over Florida. They operated around the clock, regardless of the weather, were quite ingenuous, and all were done with slave labor.  It was grueling work, especially the hand ladling from cauldron to cauldron till cooked hot enough to become “sirup” and the molasses drained off.  Sugar, syrup, and molasses (sold for rum making) were the products of this labor-intensive and profitable endeavor. 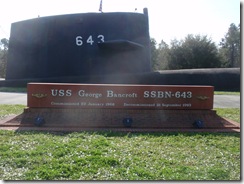 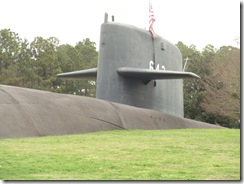 In St Mary’s, Georgia, we discovered we were staying next door to the very large King’s Bay Submarine Base. No tours available, but the entrance gate was worth stopping for.  It is a replica built with earth, covered with gunnite, and the neat thing is the sail.  It is the real deal, from the USS George Bancroft, the fourth vessel named for the former Secretary of the Navy (during1800’s). This last bit of info is from our ex-submariner, son, Dean! Veterans from this sub did all the work for this great entry. 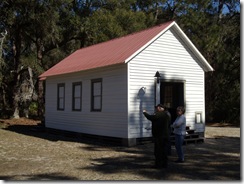 While here in St Mary’s, GA, we boarded a ferry to visit Cumberland Island Nat’l Seashore.  This was the island on which the Carnegie’s of Pittsburgh Steel fame had their winter home. That home, which was named Dungeness and over 37,000 sq ft, is no longer there, just ruins left from a fire. The home below with the Georgian columns was built as a wedding gift for one of their daughters. It was a mere 22,000 so ft, and fun to tour.  The little building above is the African Methodist Church built in 1800’s, and it’s claim to fame is being the place John Kennedy Jr chose to marry his bride.  He often vacationed on the island while growing up.  The last picture is of the Country Club on Jekyll Island, the island north of Cumberland Island.  It was the playground for the rich & famous of the late 1800’s and early 1900’s.  (J P Morgan, Rockefeller Sr, Goodyear, to name a few).  The private old stately winter homes there are really something to see.  The people in the last picture are guests there today, playing afternoon croquet, and all dressed in white! 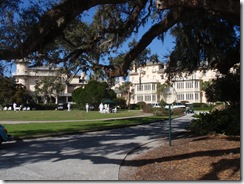 Hope you all are not worn out by our long blog! We hope to check in with you all a bit sooner from now on.  Sending ‘hello’s’  and hugs to all of you, We think of each of you often.  Mom and Dad/ Don and Gail