We Are Here (in Rome, Italy that is)! 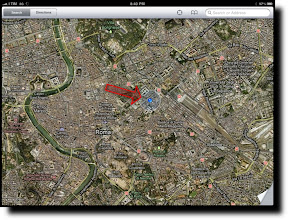 We landed a couple of hours ago and have just settled into our quaint hotel room (the "Hotel Italia"). 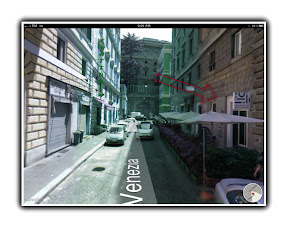 Note: Since it's dark out right now, I cheated and pulled the street view above from Google Maps (via my iPad). Thanks to Google for this image. As soon as I get a picture of my own, I'll post it.

It took nearly 18 hours of traveling - including flying from Seattle, through London, to Rome, with a couple hour layover in London's Heathrow International Airport and the time in Rome's rush hour traffic from the airport (on the outskirts of the city) to the hotel - which, as you can see in the iPad screenshot, is in the heart of the city.

Since it's nearly 9pm as I type this (Italy is 9 hours ahead of Seattle), I'm chilling out in the room while Terrie and Celeste (friend of ours) take a stroll around the block and are looking for a mini-mart to grab a few essentials.