It snows in Seattle!!?

Yes! On occasion the white stuff does fall here in and around the Emerald City.

Unfortunately, most people around Western Washington State do not know how to act, let alone drive, in the frozen H2O.

Yesterday, and last night especially, it dipped well below freezing so the ground was well suited for the stuff. As of around 8am this morning (the 22nd of Nov) it started lightly snowing and and stopped in my area just about an hour ago as it cleared up and the temp dropped even further (19 deg F right now). While we only have about 4" on the ground (most has blown away in the 30Mph winds), the snow on the streets started sticking and freezing solid early on. 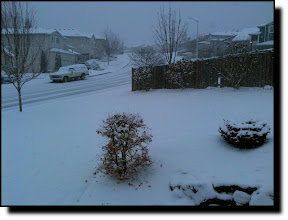 Did I mention Washingtonians don't know how to drive in it? Here's a screen shot of the Seattle Area Traffic map from the Seattle Freeways app on my iPad.

Note: That's a bus turned sideways on the freeway in the smaller inset image. 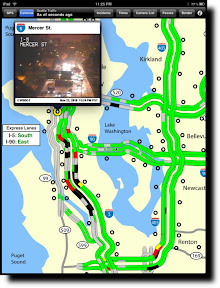 Yes, people have been stuck on the freeways for hours....and hours. Did I mention people don't know how to drive in snow here? Thank goodness I work from home! :-)

Email ThisBlogThis!Share to TwitterShare to FacebookShare to Pinterest
Labels: Weather